Tension in Hailakandi after one killed in police firing following clash 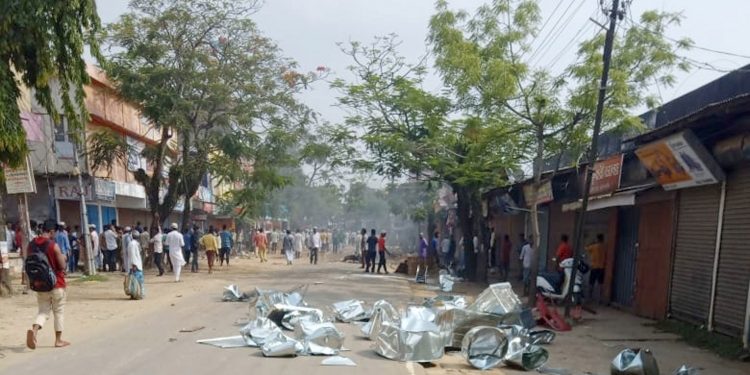 A scene after communal clashes broke out between two communities in Hailakandi town on Friday. Image credit: UB Photos

Official sources said mobile internet services in the district remain suspended to prevent spread of rumours through social media platforms such as WhatsApp and Facebook. Bulk SMS services have also been barred.

Platoons of Assam rifles have been rushed in from neighbouring Mizoram and Manipur and deployed in violence-hit Hailakandi town and other sensitive areas of the district.

There is an undercurrent of fear that people may resort to retaliatory attack to avenge the killing of the youth, said locals.

The district has been put under supervision of senior police officers including ADGP Mukesh Agarwalla, who is camping in Hailakandi town along with Barak Valley division commissioner Anuwaruddin Choudhury.

Assam environment & forest minister Parimal Suklabaidya, who met the family members of the killed youth, Jasim Hussain on Saturday morning at Narayanpur village on the outskirts of Hailakandi town, said the situation is under control and government is taking all possible steps to restore normalcy in the area.

“We have taken all possible steps to maintain peace in the area. We have interacted with the local people and trying to make them understand so that they don’t resort to violence,” minister Suklabaidya told Northeast Now on phone from Hailakandi.

He said the state government has announced a compensation of Rs 5 lakhs for the family of the deceased youth and Rs 50,000 for those, who were injured in the clash.

Suklabaidya said that there might have conspiracy behind the violence as it was irrupted from a minor incident.

“The chief minister has ordered a probe into the violence and everything will be clear after the investigation,” he said.

According to an unconfirmed report, another youth, who was hurt in the clash, has succumbed to his injuries at Silchar Medical College Hospital (SMCH) on Saturday morning. Police, however, have rubbished the report.

Nine injured persons, who were admitted to Silchar Medal College Hospital (SMCH) in a critical condition, are being treated at the college hospital.

At least 15 persons including three police constables were injured in the communal clash irrupted on Friday in the town.

The clash had broken between people of two groups when some local residents protested against namaaz being offered on a road in front of a mosque.

“We had no option but to open fire. The mob was extremely violent. The stone pelting was unrelenting and it was a grave danger to the security of the personnel. First we fired in the air and then we were forced to fire at them,” Hindustan Times quoted SP Mishra as saying.

Following the incident, curfew was clamped in the entire district on Friday and will remain in force till 7 am on Sunday.