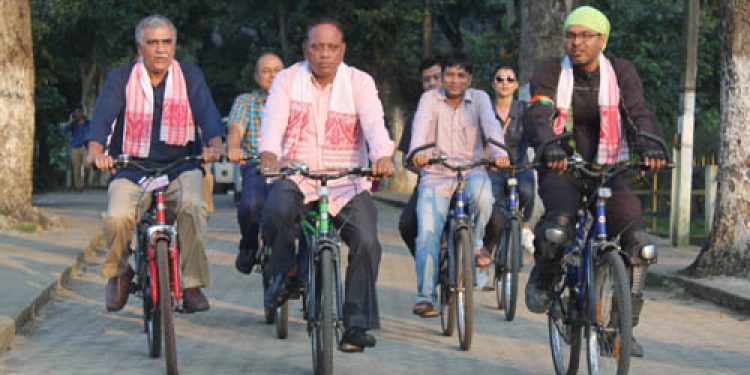 Environment and Forest Minister of Assam Parimal Suklabaidya and officials along with Julin Baruah who undertook a pan India bike rally with a motto to promote awareness about Indian rhinoceros during the flagging off from the Assam State Zoo in Guwahati and will cover the 7 sister states on 03-10-18. Photos: UB Photos

Assam Environment and Forest Minister Parimal Suklabaidya inaugurated a bike rally led by Julin Baruah who is undertaking a pan India rally to sensitize public about the Rhino.

The rally was flagged off by the Environment and Forest Minister, in the presence of senior officers of the Assam Forest department including the Pccf and Hoff, and other famous personalities like Singer Dr Sangita  Kakati.

The highlight of the event was that the Environment and Forest Minister himself cycled from the rhino enclosures to the zoo main entrance along with Julin, from where Julin carried on the bike.

The efforts of Julin was highly commended by the Environment and Forest Minister who as a token of recognition presented him with a wooden model of a small Rhino.

To add to the occasion, Singer Sangita Kakati sang a melodious self composed song on Rhino. The visitors were spell bound by the melodious voice. The song and other overall program was so well received that Radio Mirchi said that they will play it repeatedly on their air channel for promotion of Rhino.

At the end of the program, Julin begun his endeavour on his bullet to spread the message for the sake of Rhino. Julin Baruah’s  mother also attended the program.