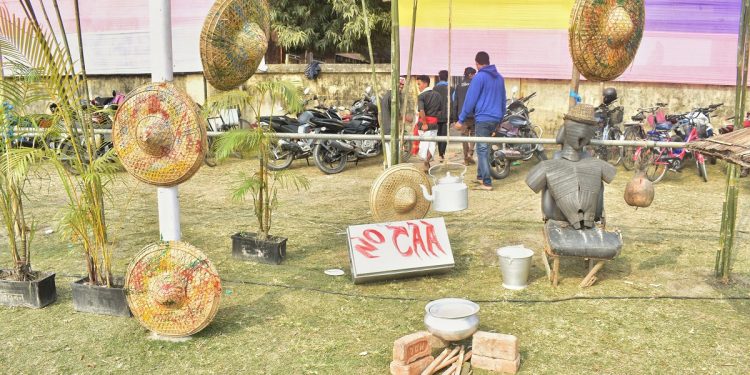 The symbolic protest against CAA at the venue in Tangla town of Udalguri district on January 31, 2020. Image: Northeast Now

As protest against Citizenship Amendment Act (CAA) continued across the length and breadth of Assam, the two-day Kalaguru Sangeet Mahotsav 2020 at Tangla in Assam’s Udalguri also had anti-CAA theme.

The festival hosted by Zubeen Garg under the banner of Kalaguru Foundation and Zubeen Garg Fan Club at Tangla High School playground which kicked off on Friday was not left untouched by anti-CAA vibes.

A ‘No CAA’ signboard in an apparent protest against CAA is vividly displayed in a symbolic protest where a tea pot is hanging meaning ‘No Chai’ and a dummy ‘Chaiwala’ is placed in a seat.

“We came up with the symbolic protest against the contentious CAA which is detrimental to the cause of Assam and the Assamese,” said Diganta Rabha one of the members of the local organizing committee of the music festival.

Though it is a music festival to pay homage to the doyen of Assamese music and art, Kalaguru Bishnu Prasad Rabha, the people of the Bodoland Territorial Council (BTC) region have also protested against the Act and lended their moral support to the people of Assam even though the act is not applicable to the four districts Kokrajhar, Chirang, Baksa and Udalguri administered by the Bodoland Territorial Region (BTR) which falls under 6th schedule areas,” he added.

The anti-CAA protest in the venue have also turned into a photo zone where the visitors were witnessed clicking selfies and photos.

Hearthrob Zubeen Garg has been one of the leading anti-CAA protest faces in Assam who have been vocal against the Act and has vehemently criticized the BJP government and its leadership for imposing the Act.

He has also united many artistes from the Assamese Artists Association to stage non-violent protests across Assam in the form of drama and art and musical protest.

Garg has also vowed to not shave until CAA is scrapped.

“My beard is changing to grey because I am growing old and have been engaged in this movement against the Act,” he said.

“But I have decided that I will only shave when the government scraps the CAA,” he had said during a cultural function in Barpeta.

Protests have taken place in different parts of the country, including the national capital, over the CAA which grants citizenship to Hindus, Sikhs, Jains, Parsis, Buddhists and Christians fleeing religious persecution from Pakistan, Afghanistan, and Bangladesh and entered India on or before December 31, 2014.