Unfortunately, unlike the Manipur chief minister, Sarbananda Sonowal does not belong to that class of political heavyweights who have the guts to express any reservation on diktats issued by Delhi 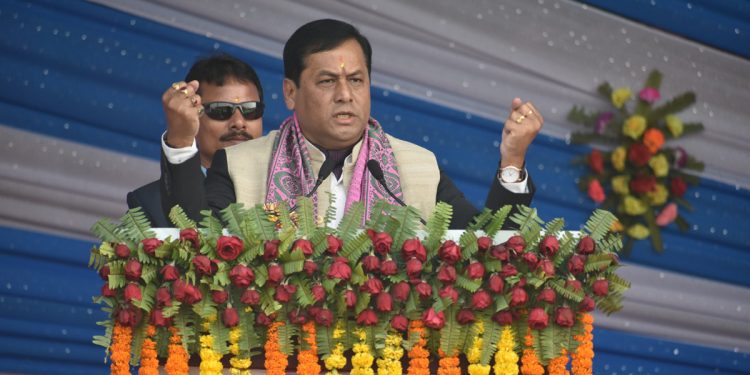 Assam chief minister Sarbananda Sonowal’s statement before a section of the press that he was ready for talks with the organisations protesting against CAA in the state seems to be totally hollow and devoid of even an iota of pragmatism.

It is about two months now since the Citizenship (Amendment) Bill (CAB) had sailed through both the Houses of the Parliament followed by the assent thereto by the President of India. It is now the law of the land.

Presently, having completed the necessary formalities, CAA is virtually on the anvil for its implementation.
Considering Sonowal’s statement with the stage all set to transform hoards of Hindu Bangladeshis to Indian citizens, the question certainly arises as to what could be the chief minister’s real motive behind the statement.

Meanwhile, it appears to be clear as daylight that the protesters in millions are resolute in their demand for the scrapping of the CAA or at least to exempt Assam from the ambit of the amended law and the Centre fully resolved not to budge an inch from its stand.

It is also a known fact that constitutionally speaking, no chief minister has the locus standi to change a law duly enacted by the Parliament or even to dilute its contents. If the Assam CM desired for anything other than the Centre’s one-point crusade for the blossoming of the CAB to CAA, the appropriate time for him was to raise the matter before the Centre prior to the tabling of the CAB in the Lok Sabha.

Unfortunately, unlike the Manipur chief minister, Sonowal does not belong to that class of political heavyweights who have the guts to express any reservation on diktats issued by Delhi.
Hence in view of the time that has elapsed since the birth of the new law, it is strange that so late in the day on the eve of the 71st Republic Day Sonowal made the announcement that he was ready for talks with the CAA protesters to resolve the issue while specifically referring to the AASU.

When Sonowal as the chief minister has no authority to change even a punctuation mark of the CAA, may one ask as to what the protesters would expect from him when they are seemingly firm about their demand.

As per a media report, responding to the chief minister’s statement (not call), AASU general secretary Lurinjyoti Gogoi stated that before the CAB was placed in the Parliament, Union home minister Amit Shah had talks with the AASU leadership on the issue and that the meeting was attended by Sonowal who was “in fact supporting the CAA.”

The media report went on to add that the AASU leader said, “The chief minister should have tried to impress upon the Union home minister that the situation in Assam is different from the rest of the country but he failed to do that.”

Whether the chief minister really failed and missed the all important bus or could not even muster the guts to move even an inch towards the bus counter may be left to anybody’s guess.

In an earlier column this writer had pointed out that Assam CM Sonowal and his Manipur counterpart Biren Singh are on the opposite poles in the matter of their commitments towards the interests of their respective people.

Beginning with a resolution in the state Assembly, Biren Singh fought his way all through and finally succeeded in keeping Manipur outside the ambit of the CAA. Any chief minister’s political sagacity, acumen and sense of belonging to the state and upholding the interests of the people can be gauged from his/her deeds and not from decorative words and high-syllable rhetoric.

In this respect CM Singh has passed the virtually insurmountable test of CAA with flying colours. On the other hand, Sonowal has gone on records stating that he would not allow the interests of Assam to be harmed in any way.

Yet in the matter of CAA, he stood solidly behind Delhi and flung open all gates for hoards (may be millions as the Centre refuses to specify the number) of Hindu Bangladeshis to be blessed with Indian citizenship and also ‘mati & bheti’ in Assam. In contrast, the Manipur’s worthy son of the soil Biren Singh has closed all doors to stop all Bangladeshis, Hindus or Muslims, from entering Manipur.

For over seven decades now, Assam has had to bear with the misfortune of having CMs who were/are only ‘Yes men’ of Delhi irrespective of party/parties that they belong/belonged to.

The present Assam CM proved to be no different be it in the matter of ceding Assam’s territory to Bangladesh to settle border disputes with the neighbouring country, or maintaining silence on the Centre’s border fencing hoax to facilitate limitless influx and now in respect of CAA apparently to raise a Hindu Bangladeshi vote bank on a massive scale seemingly at the cost of the extremely fragile demographic scenario and the culture of the greater Assamese society.

On the other hand, as per another media report that appeared a few days prior to the statement made by the CM, Assam finance minister and NEDA chairman Himanta Biswa Sarma stated after having met the home minister Shah that the “rules of the CAA are almost ready and the ministry of home affairs (MHA) will take two to four days to finalise them.”

Accordingly, on the basis of Himanta’s statement it may be presumed that the rules of CAA might have been finalises by now and that the ground work for its implementation might have begun.

Again, subsequent to Himanta’s announcement and prior to Sonowal’s statement, Union home minister Amit Shah while addressing a public rally on CAA in Lucknow announced that “the law will not be scrapped despite protest over it.”

With the Centre’s stand on the CAA being as firm and solid as the Rock of Gibraltar and possibly the finishing touches are being given to launch its implementation, one may logically question as to what could possibly be the real purpose behind Sonowal’s statement (not call). By all yardsticks it appears to be wild, sans any meaning and could also be with a view to misleading the people in the backdrop of the Centre’s resolute stand and the electrifying pace with which the latter is surging ahead for its implementation.

Again, public memory being extremely short, the statement may come handy in future to the CM to state that he made a call to the CAA protesters  for talks to ‘resolve’ the issue but they turned down the call.

Constitutionally speaking, the CAA is a rock-hard ground reality. While talks are held between opposite parties on any issue to sort out a possible middle path, in the case of the CAA, being a central law, as pointed out above, no CM has any authority to effect any change in its texture, content or implementation.

Unfortunately for the people of Assam, unlike Biren Singh, Sonowal failed to rise to the occasion before the Centre, when the “tide” on the CAB (now CAA) was at its “flood” before its introduction in the Parliament

Thus at the end of the day the question persists about the Assam CM’s intention behind making the statement despite his being fully aware about his absolute powerlessness in respect of the CAA.

Could it be an attempt to divide the protesters into several fragments? Could it be to rope in some protest leaders to the pro-CAA government camp through effective ‘mantra’ and ‘management’?