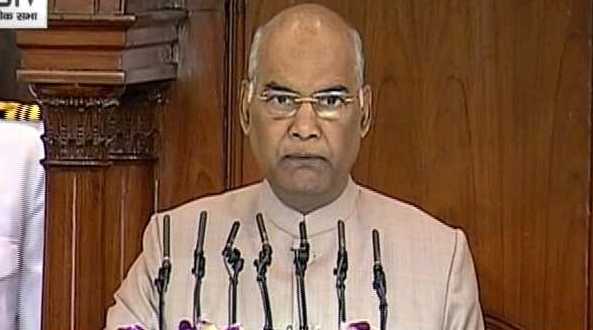 President Ram Nath Kovind on Friday said the Central Government has fulfilled the wishes of Mahatma Gandhi by passing the Citizenship Amendment Act (CAA), 2019 in both Houses of the Parliament.

Addressing the joint sitting of Parliament ahead of the Budget Session, the President said, “Mahatma Gandhi has said that after partition, minorities from Pakistan and Bangladesh who have been facing persecution on religious grounds should be granted citizenship if they come to India seeking refuge.”

“I am happy that both Houses of the Parliament have passed CAA to ensure that the wishes of the Father of the Nation become true,” he added.

Kovind’s words were praised by the BJP party and many were seen thumping on desks during the meeting to show their support.

However, the Opposition parties strongly protested against the President’s words.

It may be mentioned that CAA was passed in Lok Sabha on December 9, 2019 and Rajya Sabha passed it in December 12 last year.

According to the CAA, 2019, persons belonging to Hindu, Sikh, Buddhist, Jain, Parsi and Christian communities who came to India from Pakistan, Afghanistan, and Bangladesh till December 31, 2014 would be granted Indian citizenship.