Amendment of Citizenship Act and Emerging Situation in Assam

Sarbananda Sonowal, BJP's chosen mascot, one time darling of the people has lost his aura completely and is now frequently ridiculed as a hero turned into a villain 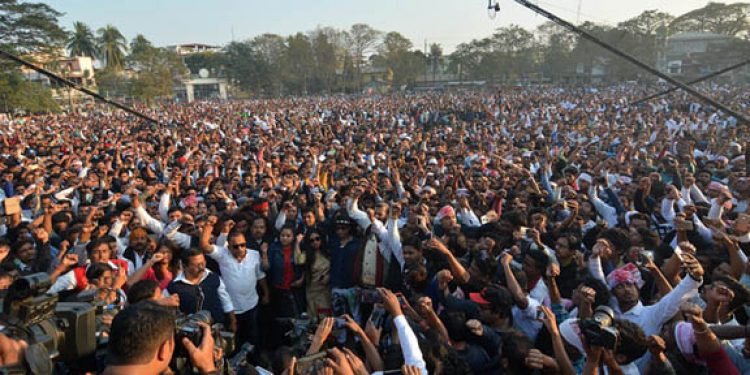 The ruling party’s obstinate pursuance of illegal Bangladeshi migrants‘ votes, (the intention has been made public by one of their own Assam Ministers, who quite openly hinted that Hindu illegal migrants would be settled in those constituencies where Muslims are in majority to change their demographic profile) has caused the strongest reaction among the indigenous communities not only in Assam but throughout the Northeast.

It’s manifestation has already been visible. The disappointment with the ruling party has now turned into anger of enormous proportion and the region is witnessing it’s expressions in different forms.

What should be known by the ruling party is that the indigenous people of this region will in no case accept any violation, and even dilution, of the Clause 5 of the Assam Accord and any move towards that end will be treated as betrayal.

The move to amend the Citizenship Act by the ruling party is a move to subvert the NRC, even before it is completed. The win in the recent Panchayat election in Assam and it’s capture of two district councils in the hill districts of Assam, by whatever political game plan, seem to have emboldened the party to force the amendment of the Citizenship Act on the Assam’s indigenous communities without realising it’s emotional effect on these people.

The anger may burst forth in a disturbing way creating a vortex of unknown consequences. The party must not take the recent electoral successes as the index of acceptance of its communal design at grass roots of Assam. The sub-national emotion around the perceived existential threat (perceived but not imaginary) works very differently in a complex way, which the simple electoral calculations do not manifest.

Sarbananda Sonowal, BJP’s chosen mascot, one time darling of the people has lost his aura completely and is now frequently ridiculed as a hero turned into a villain. His clean image in administration is now sullied by his meek and mechanical role as the agent of his chosen party’s communal agenda.

In its euphoria, the party may have failed to understand the real pulse of the people here. Further, in its zeal to legitimize the past illegal migration that will also encourage the trend in future, the party has not cared that it has questioned the ability of Bangladesh to protect it’s minority. In a sense, its policy has crossed the sovereign boundary.

The programme Bajraninad (Thunderous Roar), carried out by AASU and thirty other indigenous organizations is a roaring signal of the people’s determined resistance against the ruling party’s agenda. The peaceful nature of the protest indicates that the people are still patient. But if smoke is bellowing from the peak of a volcano, there is possibility that an eruption may be lurking too. One has to guard against such a possibility.

Presently, various manners of agitations are under control. But situation is volatile and in such a situation  peace often becomes it’s victim. This should not happen. Those who do not want success of the agitation may create all manners of provocations to subvert it’s peaceful nature. If they succeed, it will give the ruling party a big handle to suppress it by brute force.

The organizations which are spearheading the agitation need to ensure that the mode of agitation remains constitutional, as one of the objective of the agitation is to protect the Constitution’s secular character, and that it’s mode need to be of Satyagraha, based on moral power of the people. . There has to be massive turnout to show it’s strength but this strength should be of moral unity. Such programs will demonstrate the power of the people but steer clear of agendas that have violent potential.

On their part, the ruling party should know that sub-nationalism strongly embedded in the indigenous people’s minds often receives centrifugal tug and therefore may lapse into demand for secession if the people’s pulse is misread. It has happened not long ago in the region.

The region’s past history shows that liberation of the land had a strong appeal to the liberty-loving people here untill their participation in India’s Independence struggle. After the country’s Independence, it has been noticed many a time that temperance often tends to wear off when the people feel that they have been ignored in many respects and they have been only the secondary receivers of the fruits of the freedom struggle.

This perception is deep and national parties have often failed to adequately address these feelings. In this background, any existential fear may cause disruption of the people’s bond with the nation. At this point, the BJP is provoking this centrifugal tendency in a dangerous way.