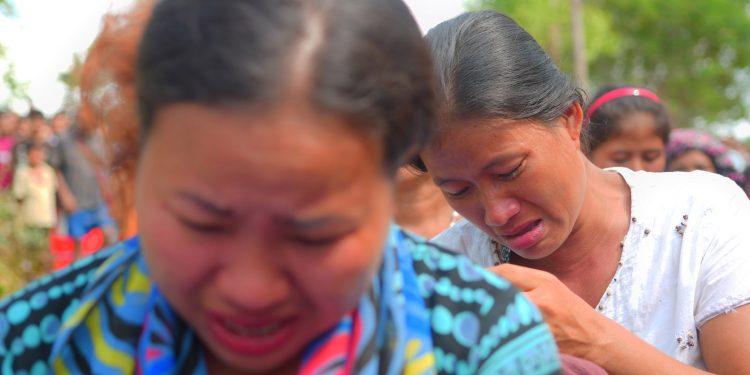 Bru refugees weep amidst a road blockade at Dasda-Anandabzaaar area in North Tripura on Sunday while describing their plight in relief camps. Image credit - Abhisek Saha

Two more deaths have been reported from Bru refugee camps at Kanchanpur in North Tripura district.

With these two deaths, six people including four kids have died in Bru refugee camps.

According to MBDPF leaders, on Monday, Ajitari Reang, a three-year-old child and Pigli Reang, a four-month-old kid died due to starvation.

Of the total six deaths, five were reported from Naisingpara refugee camp.

Pigli Reang, who died on Monday, was from Hamasa Para refugee camp.

MBDPF leader Bruno Mesa informed that some other old people and children are also seriously ill.

“They are not getting food since long time,” said Mesa.

The Mizoram Bru Displace People’s Forum claimed the cause of the deaths as starvation.

The Forum leaders said, “For the last couple of days, we are not getting food and due to starvation, people have started to die in the camps.”

They also claimed, “The lactating mothers are also not getting proper food due to which kids are not getting breast milk.”

Meanwhile, Tripura chief minister Biplab Deb said, “The Brus or Reang people, who have been in the refugee camps since long, should go to Mizoram first.”

“There is no alternative but they first go to their homeland. The central government and the Mizoram government have assured them to give the assistance,” he added.

Section 144 CrPC has been clamped in Kanchanpur.

Ronald Sapa, MP of Mizoram, who is in Tripura now said the union home ministry should send a team to check the condition of the refugee camps in Tripura.

Dey said, “They must go to Mizoram but they should have food first. The indigenous people are in starvation and our state government is silent here.”

Dey added, “What is the government doing is totally inhuman.”

The CPI(M) also criticised the state government’s attitude and demanded that rations be sent to the refugee camps.

From October 1 this year, the central government stopped ration supply to the refugee camps.

The central government has decided that it would not continue the refugee camps at Kanchanpur anymore.

More than 35,000 Bru refugees have been staying in different refugee camps at Kanchanpur since the last two decades after they fled from Mizoram due to ethnic clash.

The 9th phase of repatriation started from October 1 this year and till now nearly 700 people have been repatriated to Mizoram from Tripura.

The Bru refugees are agitating against the government’s decision not to provide ration in the refugee camps.

Since the last six days, they have blocked the Anandabazar-Dashda road.

The situation is alarming in Kanchanpur subdivision.

On Tuesday also, they staged protest and blockade the road.