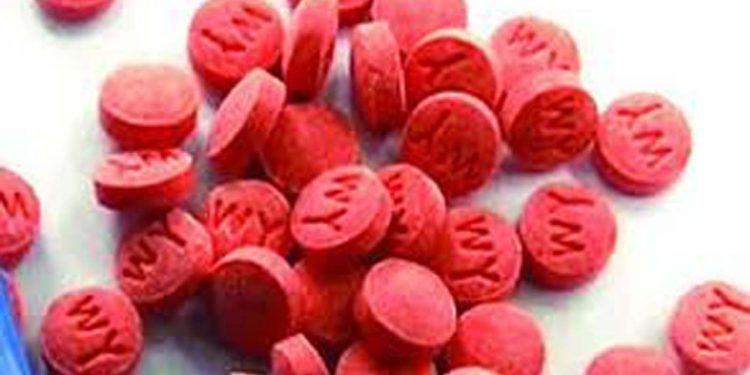 According to information, Churraebari Police seized the Yaba tablets from Nadiapur Railway Station at the entrance of Tripura gate.

Arrested Kamarul Alam, 45 is the son of Abul Kalam, a resident of Tilabari (Ward No 1) at Patharkandi in Assam’s Karimganj district.

Alam was nabbed as he was heading towards Agartala with the consignment from Assam’s Silchar.

Talking to the media, the officer-in-charge of Churraebari PS, Jayanta Dey, said, “We have recovered a total of 20,000 Yaba tablets worth Rs 10 lakh from the possession of Kamarul.”

Kamarul Alam was under target of the police for his involvement in smuggling of contraband goods.

Getting alarm, police had set a trap for catching him red-handed. And accordingly, police were able to arrest him at the initiative of the officer-in-charge and his deputy of Churraebari PS.

Alam will be produced before the court on Wednesday.

The banned narcotic Yaba tablets contain a mixture of methamphetamine and caffeine.

Apart from Tripura, there are also repoprts of Yaba tablets being seized by police and other secirity force personnel in different parts of Northeast India.

According to reports, several Indian syndicates are involved in smuggling of Yaba tablets from Myanmar and then send the same into Bangladesh with the help of their carriers.

They also seized 7,000 numbers of Yaba tablets weighing about 720 grams worth Rs 35 lakh from his possession.

According to reports, the BSF personnel deployed at Mubarakpur border outpost nabbed one Numan Ahmed and seized the banned Yaba tablets.

Sources said, the person was trying to smuggle the contraband to Bangladesh through the international border.

On September 10, the BSF troops deployed at the border outpost of Deepchar in Assam’s South Salmara Mankachar district also seized 1372 Yaba tablets from the border area of Deepchar.

The Ranirbazar police on the basis of inputs received from sources seized 40,000 numbers of Yaba tablets and recovered a cash amount of Rs 24,000.

One person was also arrested in this connection.