Nagaland CM sought opinions and constructive criticisms from all sections of the people, including from the legislators, on the issue 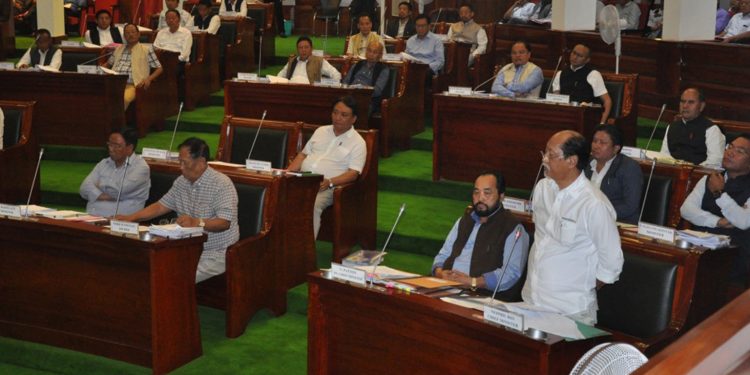 The final day of the two-day Nagaland Assembly session on Thursday had a thorough deliberation on the pros and cons of implementation of the Register of Indigenous Inhabitants of Nagaland (RIIN).

Participating in the discussion, leader of Opposition TR Zeliang said that the issue should be deliberated at length before implementation.

According to Zeliang, creation of RIIN with 1963 as the basis of categorisation without indigenous Nagas being well defined would only victimise certain sections of people.

He suggested not to mix RIIN with inner line permit (ILP) and reiterated that proper modalities should be worked out with no hue and cry.

Zeliang urged the state government to implement ILP in Dimapur district with the same stringent action as in other districts.

He added it is only to identify non-tribals and non-Nagas.

He said RIIN and ILP are two different things and totally different from each other.

“RIIN will identify us based on certain criteria whereas ILP is more or less like a travel document which enables law-abiding citizens to come and stay for a while,” Murry said.

He said “other important factors” ought to be spelt out so that no one is neglected in the exercise.

Participating in the discussion, PHED minister Jacob Zhimomi said all the members, including the NGOs, tribal hohos and civil society organisations, unanimous on the exercise.

He said the exercise has both merits and demerits but merits supersede demerits.

Once the register is implemented in toto, it could do away with pilferages in the state by way of giving an opportunity to local entrepreneurs and engaging them in developmental activities.

“It will also give effective administration and planning since the administrators and planners will get to know the exact data from this exercise,” he added.

“It was unfortunate that the Opposition members did not turn up for the consultative meeting on RIIN in Kohima last month,” said Leader of the House Neiphiu Rio while informing about the government’s stand on the issue.

“Every tribal Hohos, NGOs and civil society organisations were present and extended their support to the exercise,” Rio further said.

He sought opinions and constructive criticisms from all sections of the people, including from the legislators, on the issue.

The Nagaland CM urged all the stakeholders to come forward and support the exercise.

He added it is important not only for the present generation but also for the coming generations.

He further informed that a three-member committee has been set up on the issue and its members will thoroughly examine the matter and give recommendations/report to the government.

The leader of the House also assured that the commission will go into the details and make sure that corrective measures over earlier notifications are taken.

He said in the consultative meeting, all the tribal hohos, NGOs and civil society organisations endorsed the decision of the government and extended their support to the exercise.