May Day celebrated in Lakhimpur with passionate calls for labour equality 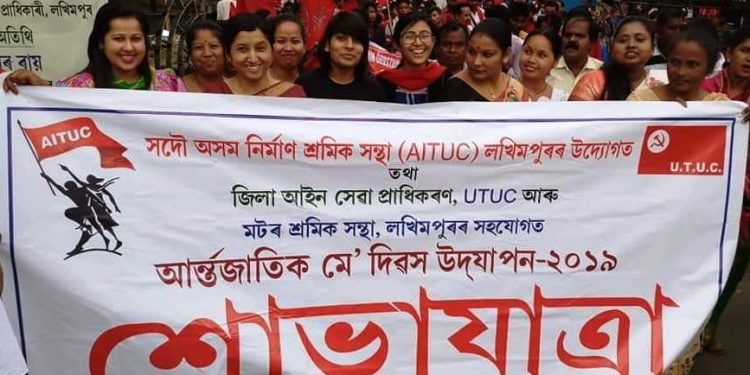 The International Labour Day, popularly known as May Day was observed across Lakhimpur district on Wednesday with calls to end wage exploitation and to treat all labours with equality and dignity.

The celebration of May Day began with the hoisting of the flag by Advocate Arup Kalita, president of the organizing committee.

A May Day themed procession was then carried out on that occasion by the organizers across the prime streets of North Lakhimpur.

An open session was held at the auditorium of District Library which was chaired by Girindra Upadhyaya, president of Lakhimpur district unit of All India Kishan Sabha.

May Day was also celebrated in Dhakuwakhona sub-division of Lakhimpur district.

In the sub-divisional headquarter Dhakuwakhona, the day was observed by 18 labour organizations under a single umbrella in a meeting chaired by Dilip Bora, president of Dhakuwakhona Motor Labour Union.

The May Day function was also attended by Lakhinath Sonowal, Gahin Chutia, Chandranath Baruah and Pradeep Rajkonwar.  The occasion also saw a street play performed the by students of Heinrich Ibsen Natyagosthi.