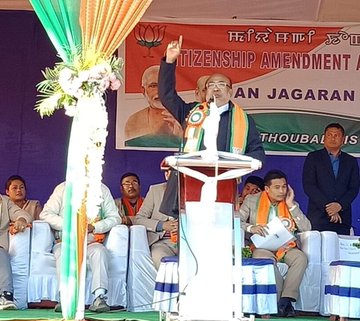 He stated this at a public meeting held at Khangabok BASU ground.

The meeting was held after taking out a rally at the district headquarters, which was organized by BJP Thoubal district to spread awareness of the recently passed CAA.

The chief minister recalled the struggle taken out by the people in demand for implementation of ILP system in Manipur.

He recalled the death of nine people in Churachandpur district.

As the demands fell on deaf ears, Manipur Peoples Protection Bill was created and till date, the pressures have been mounted on the Centre for its implementation, he said.

The people ought to show gratitude to the central leaders of extending ILP system in Manipur, he said.

The rally is being taken out by the people at Thoubal district to show that gratitude, he added.

He further questioned if the anti-CAB protester actually knew what the bill was about before it was passed to become an Act.

“The Act does not mention that those who have already settled in India will be thrown out of the country,” he added.

He urged the public and intellectuals to closely study Article 14 and mentioned that concerning right to freedom of speech and expression, there is a clause which gives certain restraints.

Since CAA will not be effective in the ILPS implemented states, there is no need to hold frequent debates on it, he added.