The central government on Tuesday said the National Population Register (NPR), the update process for which will start in April next, has no link with the National Register of Citizens (NRC).

Stressing the difference between NPR and NRC, union home minister Amit Shah said while NPR is a database for policy NRC is the process where people are asked to prove their citizenship.

As the movement against the Citizenship Amendment Act (CAA) and NRC have gained momentum in the country and abroad, the central government is trying to avoid the issue of NRC.

Earlier union home minister Amit Shah spoke about updating the NRC across the country after the implementation of the Citizenship Amendment Bill (CAB), but Prime Minister Narendra Modi recently denied any such claims.

Now, Amit Shah has dispelled reports over any link between NPR and NRC.

But, on November 26, 2014, the home ministry said the National Population Register (NPR is the “first step towards the creation of National Register of Indian Citizens (NRIC).

Also read: What is NPR? Know the facts

The then union minister of state for home affairs Kiren Rijiju in a reply to Dr. T.N. Seema in the Rajya Sabha on Nov 26, 2014, said: “The National Population Register (NPR) is a register of all usula residents which include citizens and non-citizens as well. The NPR is the first step towards creation of National Register of Indian Citizens (NRIC) by verifying the citizenship status of every usual residents.” 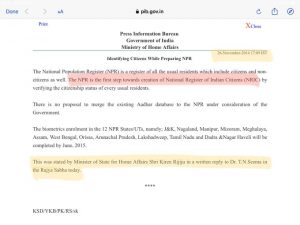 According to a ministry of home affairs notification on Citizenship Rules of 2003, “The local Register of Indian citizens shall contain details of persons after due verification made from the Population Register.”

The government also told several times that NPR is one of the steps pertaining to conducting a nationwide NRC.

The MHA notification on Citizenship Rules said: “The Central Government may, by an order issued in this regard, decide a date by which the Population Register shall be prepared by collecting information relating to all persons who are usually residing within the jurisdiction of Local Registrar.”

The annual report of the ministry of home affairs for the financial year 2018-19 also suggests that NRC can be conducted on the basis of NPR data, says a media report.

In a written statement, then MoS for home, Rijiju also said: “The demographic data for NPR has already been collected for the entire country in 2010 and also digitized thereby creating an electronic database of 118 crore persons. The government has now decided to create the National Register of Indian Citizens (NRIC) based on the information collected under the scheme of NPR by verifying the citizenship status of all individuals in the country.”

The NPR will be updated from April-September next year.

During the BJP-led NDA regime, in 2015-16, the database for NPR was updated by conducting a door-to-door survey.

However, in Assam and Meghalaya, the exercise was not carried out and only a few data fields were updated by the appointed enumerators.

This time also, the NPR exercise will not be carried out in Assam.

During the NPR exercise, no biometric was collected while giving details like passport number, Aadhar and driving licence is voluntary.

Documents are also not collected at the time of door-to-door enumeration.