Naga accord by end of this year: Ram Madhav 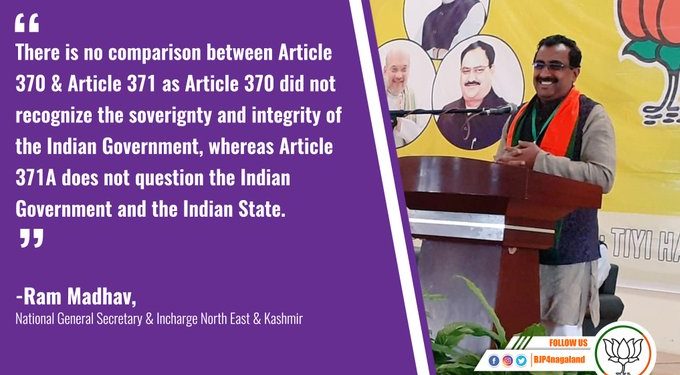 BJP national general secretary and in charge of the Northeast and Kashmir, Ram Madhav on Wednesday said the central government was committed to conclude the Naga Accord by the end of this year so that peace and prosperity would prevail in Nagaland.

Madhav said this while addressing the Jan Jagaran Abhiyan – a public awareness campaign and Sampark Abhiyan on Article 370, which was organized by BJP Nagaland State at Wokha town.

The programme was attended by a host of BJP leaders from across the State.

According to reports, Madhav was quoted as saying Nagaland is in safe hands and there was no comparison between Article 370 and Article 371 as Article 370 did not recognize the sovereignty and integrity of the Indian Government.

He also said Article 371 A does not question the Indian government and the Indian State.

Stating that there was a BJP government under Prime Minister Narendra Modi in Delhi and there was a BJP-led government in Nagaland, Madhav said therefore nobody can touch any of the special provisions provided to the state of Nagaland under the Constitution of India.

Referring to its alliance partner NDPP, Madhav was quoted as saying the seat sharing arrangement between the two parties was ‘a gentlemanly agreement’ and would complete its term.

Speaking at the meeting, deputy chief minister Y Patton and BJP state president and minister Temjen Imna Along urged upon all the party workers to spread the message of hope and peace across the State.