Assam: First Maniram Dewan statue to be set up at Jorhat 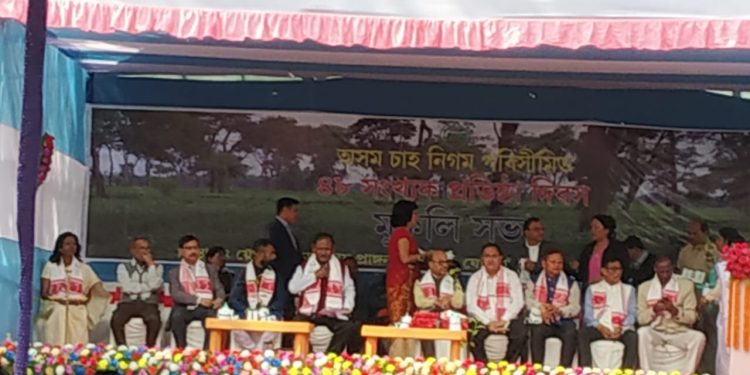 The legend of Maniram Dewan as India’s first tea planter got a further boost on Sunday with Assam government planning to erect a larger than life statue and park in his honour  at the Cinnamara tea estate in Jorhat.

Maniram Dewan or Maniram Dutta Baruah, also Maniram Borbhandor Barua, who had the gumption to compete against the British in tea had established Cinnamara tea estate and the Senglung tea estate near Sonari.

He was hanged along with Piyali Barua at Phansi (Fancy) Ali by the British on February 26, 1858 for waging war against the British East India Company during the 1857 uprising.

Speaker of the Assam Legislative Assembly and Jorhat MLA Hitendra Nath Goswami on Sunday laid the foundation stone of the Maniram Dewan statue.

This was done on the occasion of the 48th foundation day of ATCL, the state owned company under which Cinnamara tea estate and 14 other gardens now belong.

Addressing the gathering Goswami said the statue, the first in the State, and park were not just to rekindle Dewan’s memory but would be part of a larger project which it was hoped would bring economic returns to the tea community and benefit their children.

Also read: Controversy over grave: Is ‘tomb’ at Cinnamara Tea Estate that of Maniram Dewan?

“The statue along with plaque detailing his life story would be very large, like the one of Nelson Mandela, inspiring wonder and awe,” he said.

“The mini park at the tea estate as well as a tea retail outlet and tourist lodge where people could spend the day in the ambience of the tea plantation nearby is what I have envisioned as a tourist attraction here,” he added.

The tea retail centre would be constructed by Kamakhya Prasad Tasa, Rajya Sabha MP from Assam from his MP’s fund.

Goswami further said it was seen that private companies were better at managing tea gardens but selling off the ATCL gardens was out of the question as the company was yet to come out of the morass of more than Rs 500 crore debt and no private party would buy a debt ridden company.

He further said the government should not shy away from making the state owned company a profitable one as the demise of the tea industry would sound the death knell of Assam’s economy, identity and existence.

The park and statue will be constructed from the untied fund for Jorhat LAC.

Earlier Tasa elucidated the various government schemes for the welfare of tea community and highlighted the Rs 548 crore debt of ATCL and of the Tocklai Tea Research Institute which was a matter of great concern.

He reached out to the tea community by also highlighting the problems that they were facing and asked them to imbibe a sense of belonging for the garden where they worked and resided just as he had done so that together they could uplift the lot of the community.

Tasa also transcended political barriers to include Congress MLA Rupjyoti Kurmi of Mariani Assembly constituency who had also worked and petitioned various leaders for benefits and arrears to be cleared for the workers.

Tasa further announced that he would give Rs 10 lakh to modernize the Cinnamara market.

Madhumita Baruah, professor at the Assam Agricultural University and great granddaughter of Maniram Dewan thanked Goswami and Tasa for the initiative and also the Assam Chamber of Commerce for constructing the tomb of Dewan inside the burial ground of Cinnamara tea estate where he had reportedly been laid to rest after the hanging.

Managing director of ATCL Rani Katharpi said that the 15 ATCL gardens were on the path of revival with a total of 1300 acres being planted with new tea saplings in all the gardens.

“Soon the ATCL which had undergone a lot of struggle over the years,” she said, “would be out of the red.”