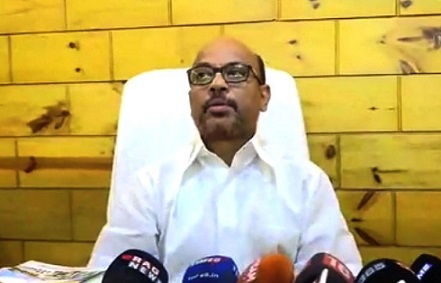 In keeping with some other parts of the country where cows have become more important than humans, Jorhat MLA and Speaker of Assam Legislative Assembly Hitendra Nath Goswami handed over a cheque of Rs 7 lakh from his MLAs fund to authorities of Geeta Gaushala at Padumoni here to buy a cow ambulance to ferry dead and ailing cows on Thursday evening.

It may be noted that the Jorhat Medical College and Hospital does not have a mortuary van to carry the dead but the Speaker may not be aware of what is lacking in his own constituency for humans.

In the same meeting held at the Hindi High School at Digambarchook here he announced a donation of Rs 2 lakh for infrastructure development of the school and handed a cheque made out for Rs 1.87 lakh for the first phase.

Reportedly the Speaker was moved by the sight of dead and ailing cows lying neglected on roadsides and therefore the ambulance to take them to the vet or bury them properly courtesy the Geeta Gaushala.

Goswami is also reported to have said in the meeting that although spending Rs 7 lakh for a cow ambulance was not permissible under the MLAs fund, he had got special permission from the government to do so.

A policeman said that when it came to people lying dead on the road, the police on being informed had to call for a vehicle from the Police Reserve and take the body  to the morgue and if the person is not identified or taken away by family then the investigating officer has to shell out a huge amount from his pockets to create the body, as a result of which everyone of us try to avoid this work.

“If only the MLA would do something in this regard,” the policeman said.  Meanwhile, the news has gone viral on Facebook with a few people making sarcastic comments on this largesse by the Speaker.