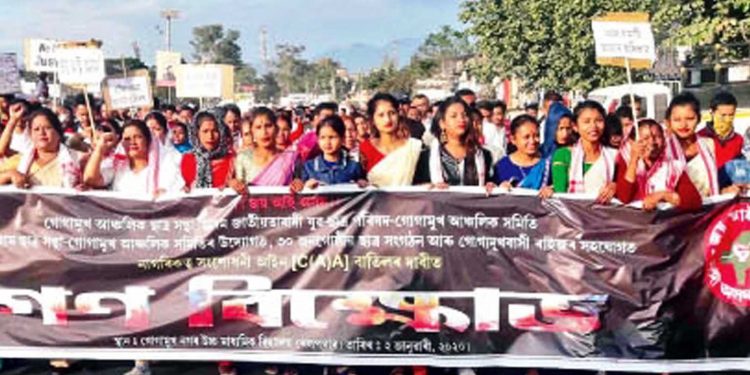 Hundreds of people participated in a torchlight rally organised by the All Assam Students’ Union (AASU) in Lakhimpur on Friday evening against the Citizenship (Amendment) Act or CAA.

Raising slogans against CAA, the participants said they will never accept CAA at any cost.

“CAA is against the spirit of Assam Accord and it will annihilate Assamese identity completely,” the protesters said.

“We can’t accept it at any cost and we will continue protesting against CAA until it is scrapped,” they added.

They also raised various slogans against it as they walked through the streets of Lakhimpur town.

Earlier on the day, braving the rain and inclement weather, thousands of people staged a sit-in demonstration against CAA in Lakhimpur.

The programme was organised by the Tai Ahom Yuva Chatra Sanmilan (TYSCA).

They raised anti-CAA slogans and said they won’t accept the Act at any cost.

Protests against CAA were also staged in Dhakuakhana by the All Tai Ahom Students’ Union (ATASU) and Communist Party of India (CPI).

They also raised anti-CAA slogans and urged the government to scrap the Act with immediate effect.