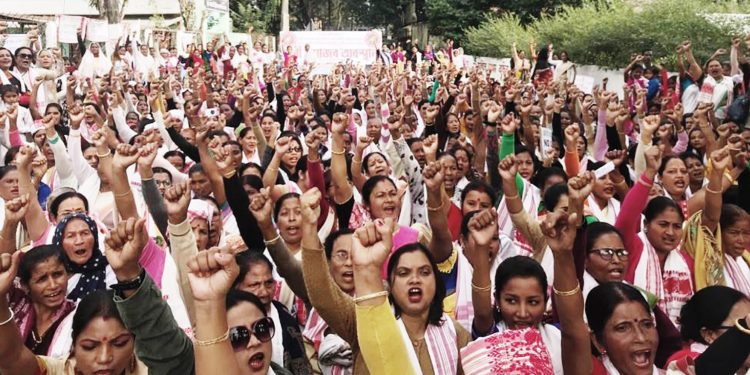 On being asked about his long silence over the issue so far, he said, “I am concerned only for the people of the 15 Panchayats in my constituency.”

“I don’t know about AGP leaderships’ stand on CAA. I am here to protest against it,” Dutta reiterated.

On being asked whether he would resign, Dutta said the issue of CAA would be resolved in court, so there was no need to resign.

The AGP MLA was also joined by Nowboicha MLA Mamun Imadadul Haq Chowdhury of AIUDF in the anti-CAA demonstration.

Meanwhile, a massive protest rally against CAA was taken out by women at several parts of the state including North Lakhimpur.

Called by the All Assam Students’ Union (AASU) and 30 other organizations, women in large numbers came out to demonstrate against CAA and demanded to scrap it.

In Lakhimpur, women in large numbers converged in front of PNGB Girls’ High School and sat in the demonstration by blocking the road for four hours.

The protesters also expressed their solidarity with Akhil Gogoi’s mother who is on an indefinite hunger strike demanding Gogoi’s release.

The Krishak Mukti Sangram Samiti (KMSS) leader was arrested from a house in Jorhat on December 12 evening.

A special court of National Investigation Agency (NIA) in Guwahati sent Assam Gogoi to a 10-day NIA custody on Tuesday.

Gogoi’s mother, Priyada Gogoi, demanding his release began her indefinite hunger strike on Friday at her residence in Selenghat in Mariani.