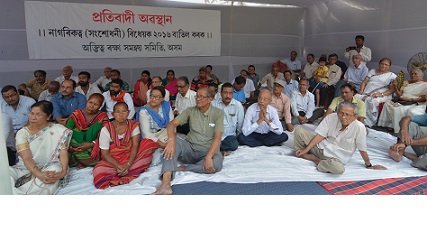 Astittwa Raksha Samannay Samiti staged a demonstration in protest against the controversial Citizenship (Amendment) Bill, 2016 at Dighalipukhuri in Guwahati on Saturday.

While denying the possibility of identification and deportation of illegal migrants without a specific bilateral treaty between India and Bangladesh, retired IPS officer Hiranya Bhattacharya said, “NRC is not the final solution to identify and deport illegal Bangladeshis from Assam.”

Expressing his concern over the uncertainty over identification and deportation of illegal migrants with the help of the updated NRC, Bhattacharya suggested formation of a ‘Shram Bahini’ with the migrants, who would be identified as foreign nationals, for economic development of the State.

Eminent film director Jahnu Barua, who also joined the protest programme, while appealing to the people of Assam to come out in unison for the greater interest of the community, said, “I have doubt on the survival of the Assamese language in another 100 years. The language is on the verge of extinction.”

While opposing the Centre’s move to implement the Citizenship (Amendment) Bill 2016, retired IPS officer Hasinur Rahman said, “The Bill is against various provisions of the Indian Constitution. It will jeopardise the identity of the Assamese community once it is implemented.”

Talking to the media, former Vice-Chancellor of Gauhati University, Dr Gajendra Nath Talukdar said, “The rulers (BJP) have no right to remain in power if they do not obey the Constitution.”

Socialist Abani Borthakur expressed his views to involve the farmers’ section of the State to succeed in the ongoing protest against the Citizenship (Amendment) Bill.

Borthakur also told about a united protest across the State to protect the identity of different communities of the State.

Senior advocate Arup Borbora emphasised on the need to unite various political parties and organisations across the country against the Citizenship (Amendment) Bill 2016 which the BJP-led Central government has been trying to pass in the Parliament to provide Indian citizenship to illegal migrants like Hindu Bangladeshis.