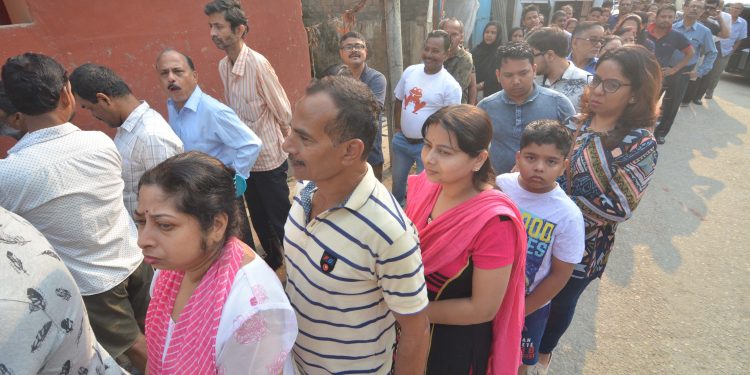 Voters standing in a queue to cast their vote in a polling centre in Guwahati on April 23 last. Image Credit - UB Photos

The highest voter turnout in the country was posted in four Lok Sabha constituencies of Assam – 85.11 per cent – in the third and final phase of the Lok Sabha elections in Assam held on April 23 last.

The polling percentage of 85.11 per cent in these four constituencies – Dhubri, Barpeta, Kokrajhar and Guwahati – was also the highest among all the states that went to polls in the third phase.

Reports stated that this poll percentage is the highest among 13 states and two union territories which went to the polls on April 23 last. The overall polling percentage in the third phase was 66 per cent.

In the above four Lok Sabha constituencies, Muslim immigrant voters of East Bengal origin are present in huge numbers.

Five constituencies in Assam’s tea belt went to polls in the first phase and five in the second phase.

It is in these constituencies that the Citizenship (Amendment) Bill is facing a formidable resistance.

Political pundits attribute the “extraordinary turnout” to the Citizenship Bill.

Much before the elections were announced, the Modi government at the Centre “worked overtime” to get the Bill passed in Parliament.

However, the Opposition Congress, regional party AGP (which had a “bitter divorce” with its ally BJP over the bill and then a “quick remarriage”), students’ bodies to civil society organisations – all opposed the bill tooth and nail and stalled the same in the Rajya Sabha.

The bill is set to lapse in June at the end of the term of the present Lok Sabha.

The comparison of this election’s polling percentage with 2014 show that four constituencies of Dibrugarh, Jorhat, Lakhimpur in Upper Assam and the tribal-majority Autonomous District, which have a near-zero immigrant Muslim population and are dominated by ethnic population strongly opposing the controversial bill, are the constituencies where the polling percentage has dipped.

Tezpur and Kaliabor – which boasts of a sizeable immigrant Muslim population – recorded the lowest polling percentage of 78.27 per cent among the three phases.

In the Barak Valley, Silchar Lok Sabha constituency stands out as an exception. It is the only constituency where the majority of voters’ favour the controversial bill.

This constituency saw the biggest jump in polling percentage, more than 3 per cent over the 2014 percentage.

In 2014, BJP had swept seven of these 14 seats, all in the Brahmaputra Valley, riding on Modi’s “anti-Bangladeshi” poll plank.

Five years later, Assam stands divided by the Citizenship Bill with the Brahmaputra Valley against and the Barak Valley largely for the bill.