Four constituencies in Assam that went to polls on Tuesday included Guwahati, Kokrajhar, Dhubri and Barpeta 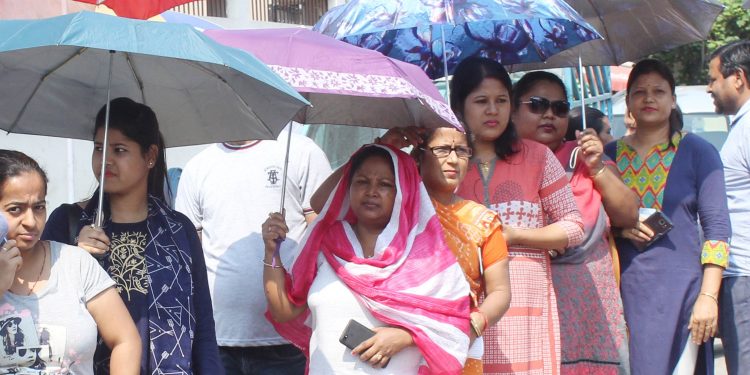 Voters queuing up in a polling booth in Guwahati. Image credit: UB Photos

The third of polling for the Lok Sabha polls came to an end in Northeast on Tuesday with four constituencies in Assam recording 78.52 percent of polling while the Tripura East Lok Sabha constituency recorded 79 percent polling till 5 pm.

Poll officials in Assam and Tripura, however, said that polling percentage will increase as they are still awaiting reports from different polling officials located in remote areas.

Four constituencies in Assam that went to polls on Tuesday included Guwahati, Kokrajhar, Dhubri and Barpeta.

The polling exercise remained peaceful without any incident of violence reported from anywhere till 5 pm.

Some incidents of malfunctioning of the Electronic Voting Machines (EVMs) reported from different polling stations. The office of the Chief Electoral Officer here is , however,  yet to spell out the total number EVMs malfunctioned.

In Assam polls were held across 9577 polling stations in the four constituencies today.

In Assam, a total of 74,77,062 eligible voters including 36,61,570 females and 157 third gender voters were supposed to cast their votes on Tuesday. There are 54 candidates in the fray this time in the four constituencies.

In Tripura on the other hand, ten candidates were on the fray this time.