#CheckTheFake-15: #Infodemic may cause more deaths than pandemic 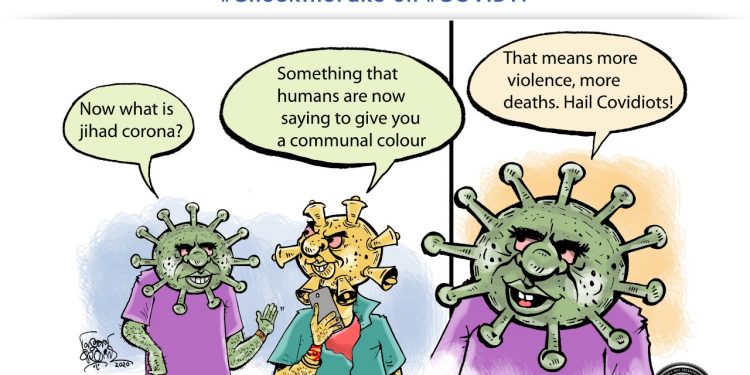 The increasing spread of novel coronavirus in India is an alarming increase of Islamophobia today.

The virus, which so far is not curable, has been fabricated with communal colour at the organization of an event within the shortest span of time.

The event is about a large international gathering of an orthodox fundamentalist Muslim group called the Tablighi Jamaat from March 13-15 in Markaz at West Nizamuddin in Delhi.

It received participants from international countries like Malaysia and Indonesia, despite the gathering was enormously injudicious and would cost many lives.

But, the entire narrative changes from a violation of the national lockdown orders to the so-called ‘intentional war’ waged by Indian Muslims against the right fundamentalist group as one cannot deny the fact that India witnessed a huge spike of COVID-19 cases after a huge number of patients later on are found to be linked to the Nizamuddin event.

Also read: #CheckTheFake-13: Cow after corona or Corona after cow, it’s all #Infodemic!

The government also claimed more than 8,000 people, including foreigners, visited the headquarters in early March.

The calculations for the COVID-19 cases changed and were represented in comparison to each state’s pre and post-Nizamuddin cases by now.

In Telangana, all 11 deaths were linked to the event with at least 265 Jamaat members tested positive.

Out of 260 cases in Andhra Pradesh, 243 had links with the Jamaat event and immediately increased the line graph of positive cases from 1 to about 30 in Assam, where more than 400 people have been quarantined out of the 835, who attended the Markaz event.

Since then, hate videos started to unleash on the internet, depicting Muslims deliberately smearing vegetables and fruits with their saliva, spitting into food served in restaurants, and coughing into the faces of other people, all with the malevolent intent of infecting non-Muslims.

Hashtags like #CoronaJihad, #BioJihad and #TablighiJamaatVirus began to circulate and trend.

The consequences were immediate, terrifying and deadly, and continue to mount.

The members of the Tablighi Jamaat are of course the most directly stigmatised and hated among non-Muslims across the country, on par with terrorists.

As per a report of The Wire, at least two suicides have already been reported by Jamaat members.

And hundreds of Muslims faced mob attacks while firing and ransacking the mosques became normal by then.

FAKE: #CoronaJihad is an opportunity for Indian Muslims to exploit the pandemic.

FACT: There is no such term as ‘CoronaJihad’ and it is used on Twitter for the first time to exploit the opportunity of sowing seeds of communal politics in this crisis. Moreover, the Muslim population will also be vulnerable to this virus if they rely on faulty medical or health information and religious extremism (According to a British researcher, Aymenn Jawad Al-Tamimi, who is a specialist on the Syrian Civil War, Iraqi Civil War and the Islamic State of Iraq and the Levant).