#CheckTheFake-13: Cow after corona or Corona after cow, it’s all #Infodemic! 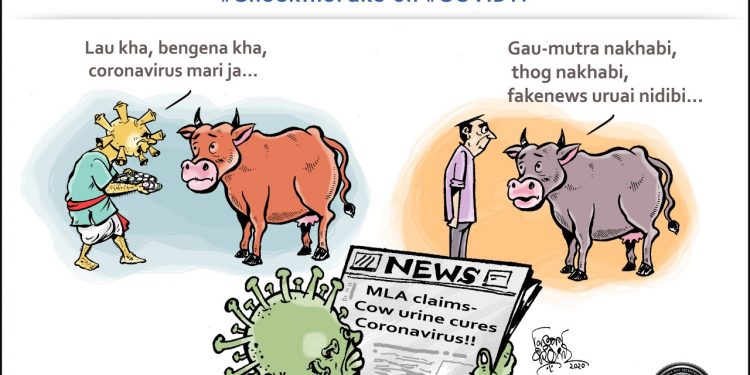 When the entire world is gripped into #COVID19 pandemic, some legislators in India seems to negotiate cow urine as an immediate antidote.

India has so far crossed 8,000 confirmed cases, with 7,409 active and 273 deaths for the outbreak of novel coronavirus, yet its legislators are no way behind in claiming that cow urine can cure the pandemic.

Earlier on March 14, organizations like the Akhil Bharat Hindu Mahasabha organized a cow urine drinking party in the national capital without waiting for any scientific validation.

“Gaumutra (cow urine) is the only answer to the coronavirus which is an avatar (incarnation) sent down to punish mankind for eating animals,” said Swami Chakrapani, head of the Mahasabha, as he and his followers chanted ‘corona shant ho’ (be still, corona).

He also promised to hold more cow urine drinking parties across the country.

Immediately after this, members of the ruling party like Bengal BJP chief Dilip Ghosh seems to comply with the statement that cow urine can cure coronavirus as he hesitated to go apart.

Instead, he said, “Some think that drinking cow urine is good for health. So, they are distributing it among others and drinking it themselves. Those who were given cow urine were clearly told what it is and were never forced to drink it. What is wrong with that?”

But the entire plot was triggered more earlier, when Suman Harpriya, a lawmaker in the northeastern state of Assam, solemnly declared on March 2 in the provincial legislature that cow urine and cow dung could be used to treat #COVID19.

It did not stop there, an official commitment to research on cow urine and other bovine products was apparent in an advertisement released by the Department of Science and Technology (DST) on  February 14, calling for research proposals into ‘Scientific Utilisation through Research Augmentation of Prime Products from Indigenous Cows (SUTRA-PIC)’.

Though immediately after, around five hundred scientists, bristled with anger wrote a letter to the Modi government asking it to withdraw a government call “for research proposals on the ‘uniqueness’ of indigenous cows and the curative properties of cow urine, dung, and milk, including potential cancer treatments”.

In their letter, the scientists noted that the call presumes “special physiological status to select breeds of only one species,” adding that “to begin a project with such presumptions is prima facie unscientific.”

Money under the scheme could be “wasted to ‘investigate’ imaginary qualities derived from religious scriptures,” they said.

FAKE: Consuming cow dung and cow urine can cure Coronavirus. In some places and several cities in India this has been administered as an antidote with a claim that it boosts our immune system and kills the virus. There have been instances where cow urine has been sprinkled on some areas as a disinfectant of sorts.

FACT: “Let me tell you that scientifically there is no basis to this particular myth. It hasn’t been proven or determined yet that cow urine or cow dung used in any form either as a surface applicant or administered orally, kills the virus”, Dr Navin Gnanasekaran, Associate Director of Medical Services and Senior Consultant Radiologist at MGM Healthcare, Chennai said to The New Indian Express on March 8.