#CheckTheFake-12: No weekends or summer trip, breathe fresh air in ‘jail’ this pandemic! 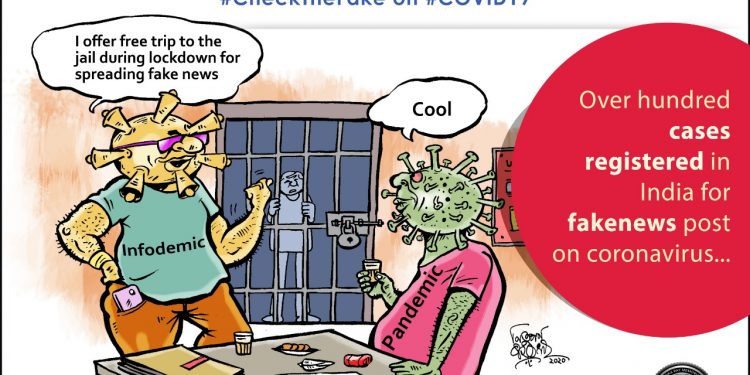 Whether you are at home or in jail, at least you are safe for staying indoors during this COVID-19 pandemic.

Yes, it may be worrisome for you, but not for the administration and the state police as you are, at least, not wandering on the streets transmitting the vulnerable novel coronavirus.

The reason for staying at home may be the pandemic, but to be in jail, one has to commit a serious crime.

And without any surprise, there are people who have been committing a serious crime of spreading fake rumours on coronavirus over the social media platforms during this lockdown sitting at home.

Therefore, putting oneself at home is not the only way to stop this pandemic, one also needs to maintain a social media distance or prevent oneself from falling a victim or stop being a perpetrator of spreading fake news on the virus.

But on the top of it, hundreds of fake news cases on #COVID19 have been reported from various states of the country with nearly hundred arrest cases so far.

As cited in a report of The Asean Post on April 11, at least 266 people have been arrested for posting coronavirus-related information in 10 Asian countries, from Thailand to India, Sri Lanka, Cambodia and Mongolia, according to an investigation based on a tally of police reports by an international news agency.

Maharashtra Police registered 161 cases against fake news and rumours on social media regarding #COVID19 so far.

Also read: #CheckTheFake-8: Not lions, but #Covidiots are roaming on streets of social media

In the last 48 hours, a total of 30 FIRs have been registered in the state while 39 people have been arrested for indulging in spreading misinformation about coronavirus.

Whereas, the Assam Police have so far arrested 33 people, including an Army jawan and a state legislator, for spreading false information about the coronavirus.

Also read: #CheckTheFake-7: Who attributes WHO on fake lockdown phases? It’s me, #Infodemics!

The CID has so far registered a total of 59 cases related to rumours and provocative content on social media.

Similar is the case with states like Karnataka, Telangana, West Bengal, Mizoram and Gujarat.

The arrest cases may be advantageous for the administration or police machineries as these people now can be quarantined for minimum of a year time and maximum of two years in India and not exceeding five years outside the country through imprisonment as a punishment under sections 52 and 54 of the Disaster Management Act, 2005 for spreading fake news on coronavirus.

The National Disaster Management Authority (NDMA) in its lockdown order refers to section 54 of the Disaster Management Act, 2005, which says: “Whoever makes or circulates a false alarm or warning as to disaster or its severity or magnitude, leading to panic, shall on conviction, be punishable with imprisonment which may extend to one year or with fine”.

While section 52 of 2005 Act says that making a false claim to get relief, assistance, repair or some other benefits from the Centre/state governments or the NDMA is punishable of a two-year imprisonment along with a fine.

In neighbouring Indonesia, more than 80 people were arrested on charges of attacking the government and its response to the outbreak, and several others were arrested for sharing false claims that a Muslim woman had died suddenly from #COVID19 at Jakarta’s international airport.

All these arrests were made under the country’s strict electronic information law with a maximum penalty of five years in jail.

So, it’s now up to you whether to quarantine yourself being at home or in jail.

In both cases, it protects the country.

FACT: There is only 1 #COVID19 positive case in Arunachal Pradesh so far.

Arunachal Pradesh’s Directorate of Information & Public Relations department on April 9 had tweeted – “This is to clarify that Arunachal Pradesh has got only 1 #COVID19 positive case till date. The reporting by Zee News is false and does not carry any authenticity”.

Later, the news channel ran an apology on its channel which read, “Due to human error Zee News ran the wrong news. We apologize for our mistake”.