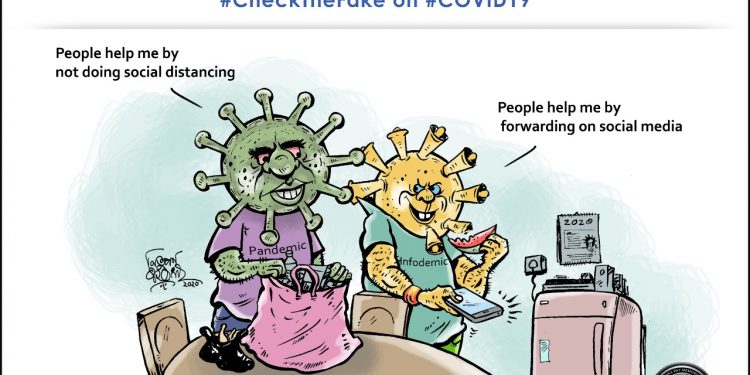 This should be kept in our minds while fighting against the both.

The spread of rumours and misinformation is continuously increasing the curve of infodemic that has become a matter of serious concern all over the world.

Assam is no way behind in helping to increase this infodemic curve, though Assam police with its activeness and innovative tactics are making the people aware about this menace on social media.

The Assam Police have also been very strict to contain the spread of this fake information from the last couple of weeks.

They have established a monitoring system to check the social media users spreading rumours about #COVID19.

According to a report of News18 India, a of total 52 cases had been registered for spreading rumors or uploading objectionable comments on social media, 25 people had been arrested and eight detained people released after issuing notice in this manner till Wednesday.

Also read: #CheckTheFake-8: Not lions, but #Covidiots are roaming on streets of social media

Sources also cited that counselling was done with 110 people and more than 120 social media posts had been deleted and many accounts were deactivated.

Assam DIPR has also formed a five-member committee for monitoring and checking fake news in all forms of media.

The committee includes officials from the information, health, police and disaster management departments.

This committee is looking after fake news and also giving directions to district information officers to look after social media handles and activate WhatsApp numbers so that the public can get access to correct information.

FAKE: ‘ONE-FAKE FORWARD’ claims – the Supreme Court of India has made an order saying that sharing of updates on COVID-19 on social media and WhatsApp is a punishable offence and the WhatsApp admins should watch out for police action.

FACT: The Supreme Court of India has not issued any order prohibiting people from sharing updates or information on COVID-19 on social media platforms or WhatsApp groups.

The message is being circulated along with a link to an article on Live Law website (www.livelaw.in) with the title ‘Centre Seeks SC Direction That No Media Should Publish COVID-19 News Without First Ascertaining Facts With Government’ highlighting that apart from getting the facts on novel coronavirus ascertained from government’s mechanism by the media, also includes the CJI SA Bobde’s order saying that the Supreme Court do not want interference into the free discussion about the pandemic, but also suggests that media should seek the official version of information on it (Times Fact Check of The Times of India, April 7).