Protesting teachers tonsure their heads in Tripura, demand their jobs back 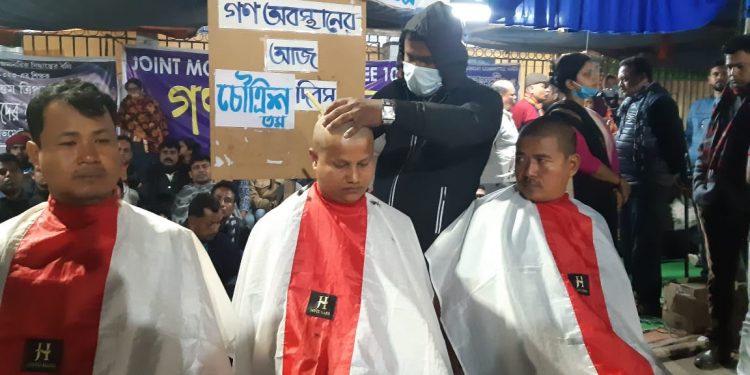 School teachers whose services have been terminated have chopped off their hair and shaved their heads to as a mark of protest against the BJP led state government at Agartala in Tripura.

These teachers have been on an indefinite protest for the past 35 days demanding jobs.

In another tragic incident, one lady teacher who lost her job committed suicide on Saturday evening by consuming acid in Khowai district.

She also made her one-year-old child consume acid.

A total of 10, 323 teachers had lost their jobs following a Tripura High Court order in 2017 that termed their recruitment process faulty.

The former CPI(M) government had recruited these teachers from 2010-2014 and their services were terminated with effect from March 31 last year.

After hearing of the suicide the agitating teachers rushed to the ILS hospital in Tripura.

Three agitating male teachers shaved their heads on Saturday night as a mark of protest against the state government.

Three female teachers also cut their hairs at the site of the sin-in-demonstration.

Kamal Deb a sacked teacher said, “The Tripura government has adopted an indifferent attitude towards us. One after another teacher is dying, but they have done nothing to provide employment to us.”

Before the last state assembly elections in 2018, the BJP had promised to engage the terminated teachers in government jobs again by amending the existing laws.