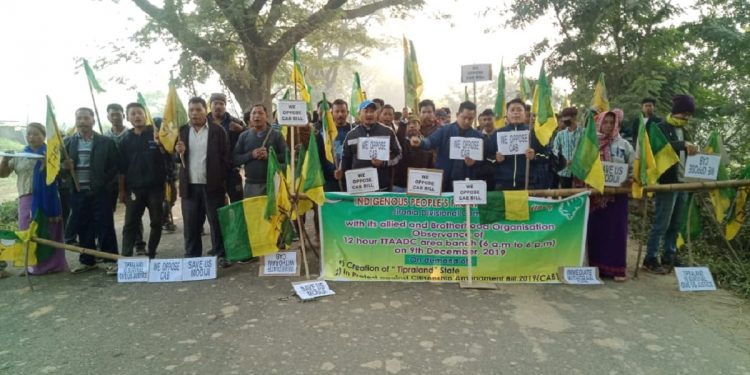 Tripura came to a grinding halt on Monday morning as the 12-hour bandh against the Citizenship (Amendment) Bill evoked total response.

The bandh has been called by Indigenous People’s Front of Twipra (IPFT) in the Tripura Tribal Areas Autonomous District Council (TTAADC) from 6 am.

This strike is also started from 6 am on Monday.

Most of all the indigenous political parties and civil societies are against CAB in Tripura.

They all called bandh or strike in Tripura against CAB, under different banners.

The bandh has created a great impact on autonomous district areas.

But in the other party of the State, where non-tribals are in majority, the bandh has not an impact.

A massive security dragnet has been prepared following the 12-hour strike called by IPFT on Monday though some examinations were already postponed apart from cancellation of multiple trains.

According to police sources, security personnel in large numbers have been deployed in various pockets to avoid any untoward incident and maintain law and order situation during the strike.

On the other hand, the IPFT supporters also geared up to make the bandh successful to press their demand for Twipraland and protest against CAB.

Meanwhile, all first and third semester examinations (general and honours) for under graduate courses under Maharaja Bir Bikram (MBB) University scheduled on Monday have been postponed following the strike.