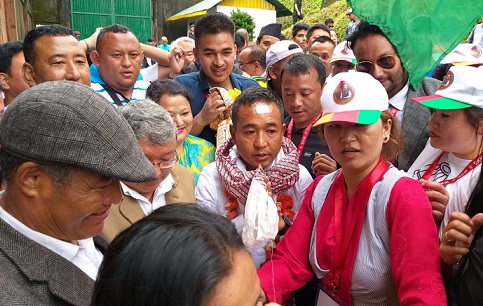 Sikkim Krantikari Morcha president PS Golay received a grand reception from its leaders, workers and supporters of the SKM party on his release from the jail after completing the sentence of one year imprisonment on Friday.

He came out at around 10:17 am on Friday from the State Central Prison at Rongneck in East Sikkim and was warmly received by senior leaders, workers and supporters of the party. He was also received by his wife, Sarda Golay and elder son, Aditya Golay.

SKM party leaders, workers and supporters started gathering since early morning in front of Rongneck jail braving rain and slowly a huge number of people gathered to receive their leader. After coming out of the jail, the party supporters received him by offering khadas and garlands and raising slogans.

Speaking to media person soon after coming out of the prison, Golay thanked the people of Sikkim and party workers for their love and support. He stated that immense love, support and blessing of the people of Sikkim and the party workers and supporter helped him to complete his one-year imprisonment without any difficulty. He expressed that by sending one PS Golay to jail, thousands of PS Golay have now taken birth in the State. On the same, he thanked the party workers for their support to bring out thousands of PS Golay in the State.

Golay expressed that he has become stronger to work continuously for the people. Without taking anyone name, he said, “I was put into the jail but the people know that who are responsible for corruption of thousand crores in the State and still in the Government.” He expressed that by honouring the order of the court, he surrender last year to complete his sentence.

“I would not fear of my life but will continuously work for the people with dedication. Now, with the decision of the party and the people of Sikkim, we would come out strongly,” he said.

Golay stated that the SKM party wants to make Sikkim as per the dream and aspirations of Sikkimese people as Sikkim has been suffering due to the dream of a single person. He added that SKM was ready for 2019 elections and now, none would become successful by using money or pressure on the people. However, he expressed that “PS Golay has not been doing politics just to fight the election”.

Responding to media queries, he asserted that it was not important that whether PS Golay can contest the election or not but it was more important that whether SDF party would win the 2019 election. “Thousands of Krantikari youths like PS Golay are ready now, so SKM party would definitely win 2019 elections whether PS Golay comes out as the captain or as the coach,” he expressed.

He addressed the party workers and supporters at Singtam Bazaar. Then the motorcade rally moved towards Mamring, Namchi, Naya Bazaar and finally concluded at his residence in Singling of West Sikkim.