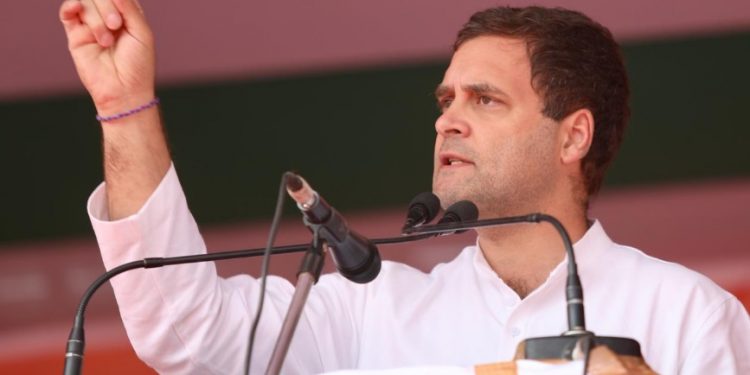 Saying that BJP government has only done ‘anyay’ (injustice) to the poor people of the country, Congress president Rahul Gandhi said that aside from bringing in the NYAY scheme for the poor, he will also be reopening two non-functioning paper mills in Assam – Nagaon paper mill and Cacher paper mill, if voted to power, as per reports.

Addressing a rally near Panchgram in Cacher district of Assam’s Barak Valley on Tuesday where he campaigned for sitting Lok Sabha MP Sushmita Dev who is contesting from the Silchar constituency for the upcoming parliamentary election, Rahul said that the country needs young leaders from Assam and the Northeast and that Dev will be made a minister if the Congress government comes to power.

Gandhi further accused the BJP of having helped only the richest people in the country.

“They had given the keys of the Indian banks to the rich people like Mehul Choksi and Nirav Modi,” he said.

Suggesting that now the tides will turn in favour of the poor in the country, the Congress president said, “We are going to give Rs 72,000 per annum to each of the 20 per cent poorest people of the country. Five crore families of the country with approximate 25 crore people will be benefitted from the NYAY scheme.”

The Congress president also said that the Modi government failed to fulfill their promise of depositing Rs 15 lakhs to everyone’s bank account, paying proper price to the farmers for their produce and employment of 2 crore youths every year.

Calling the Congress conceived NYAY scheme a surgical strike on poverty, Gandhi said it doesn’t matter which religion or community the poor belongs to or where he lives.

Criticizing the Modi-led NDA government, Gandhi said that the rate of unemployment in the country at present is the highest in last 45 years.

Taking a dig ‘Chowkidar’ slogan of the BJP party, the Congress president said that it is the rich people of the country who need a ‘chowkidar’ (guard).

“Poor people of the country do not need a ‘chowkidar’. Narendra Modi is a ‘chowkidar’ of the rich people like Nirav Modi, Mehul Chowsi and the like,” said Gandhi.

Rahul Gandhi also assured to make Assam’s Barak Valley the trade and commerce hub of the region and said that Delhi and Asia will be connected to Barak Valley to ensure development.