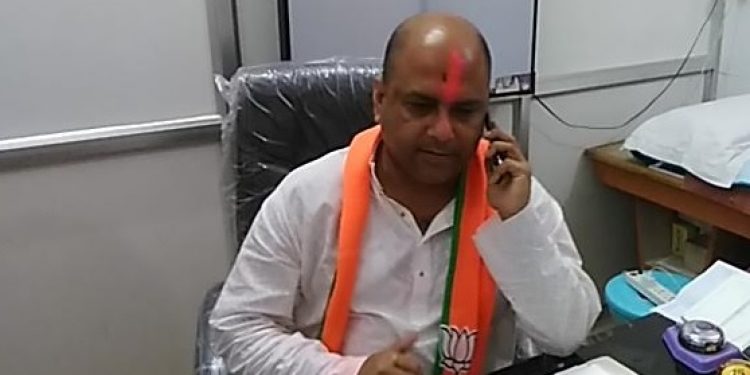 After a long wait, the Bharatiya Janata Party (BJP) came out with its first list of eight candidates who are set to contest Lok Sabha elections in Assam just less than a month from now.

On the auspicious day of Holi, the festival of colours, and that too late in the evening, supporters of Dr Rajdeep Roy were seen flocking his residence in Bilpar locality of Silchar on Thursday, all smeared with colours of hope and happiness.

Why shouldn’t they be, for Dr Rajdeep Roy has been declared to contest the much talked about Silchar Lok Sabha seat, voting of which will take place on April 18 next,.

Around 11 lakh voters of the constituency, would cast their mandate and choose their next ‘leader’.

Sitting in his official doctor’s chamber with a bunch of his supporters wishing him for getting the ticket and smearing colours on the occasion of ‘holi’, Dr Rajdeep Roy, spoke briefly of his aspirations and wishes with Northeast Now.

Northeast Now: Your first reaction after hearing the news of your name coming up. Though late in declaring but coming on an auspicious day, what do you have to say about contesting from Silchar seat?

Dr Rajdeep Roy: Late in declaring is not an issue, but, you see, in the last five years of our government in Delhi and three years in Assam, a wave of development has swept or touched each and  everyone, for which all are of the opinion that we need to bring back Narendra Modi as Prime Minister once again to power. We have to keep the good work and support all his initiatives.

Northeast Now: With what issues and assurances are you going to approach the voters of this constituency?

Dr Rajdeep Roy: In our constituency of Silchar, you can see there has been no development in the last five years. No projects were initiated. MP’s area development fund to the tune of 30 to 35 per cent has gone back which is bad thing to happen in a democracy. On the issue of Citizens Amendment Bill, the position of Sushmita Dev is very disheartening. She could not place this issue properly in the Parliament. Her stand on this issue in Delhi and Brahmaputra valley is not the same what she says in Silchar. People need to understand the game plan of the Congress party. Our Bharatiya Janata Party, what it says in Delhi says the same in Dispur and also out here in Silchar. We don’t budge from our stand and people need to understand this.

Northeast Now: Susmita Dev is a sitting MP and also All India Mahila Congress President. Are you ready to challenge her in her bastion?

Dr Rajdeep Roy: Yes, I challenge her and have already done it for quite some time now. We are very confident and ready to put up a good show for not only by winning the seat of Silchar, but also, Karimganj, and gift it to our Prime Minister, Narendra Modi.