"If the present situation continues, farm production in the State will be reduced by 70 percent" 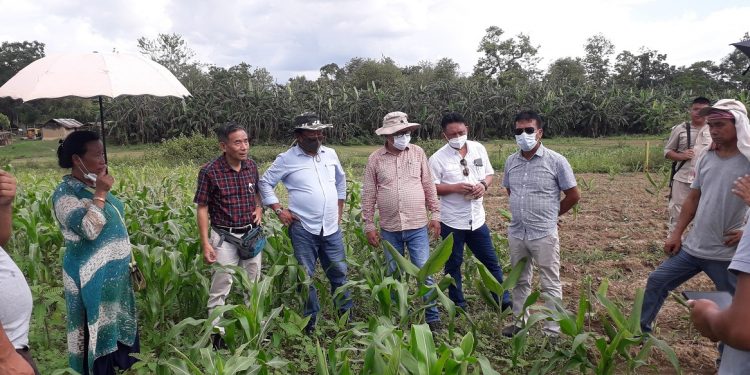 With a drought-like situation hitting Nagaland, a team of officers of the agriculture and allied departments, led by agriculture production commissioner Y Kikheto Sema, on Tuesday visited four villages under Dimapur district to take stock of the ground situation being faced by the farmers and suggest ways to enable them to continue farming despite the adverse condition.

Sema held separate meetings with the village heads and expressed serious concern that not only the Covid-19 but also the lack of rain hit the State hard this year.

“This is an extraordinary time which requires extraordinary efforts. We have to work double to make up for the losses,” he stated.

On June 15, the Nagaland government formed a core committee of Agriculture and allied departments headed by the agriculture production commissioner to monitor and review the ground situation arising out of the lack of rainfall in different districts of the State.

The team’s visit was part of the government’s efforts and as a follow up of the formation of the committee to find ways and means how best the farmers can be helped in this situation.

The team visited Molvom, Molsang, Tsithrongse and Bade village during the day. It took a round of pineapple cultivation in Molvom and Molsang village, known for sweetest pineapple production in the country, and also visited paddy, turmeric and maize fields in Bade village which produces and supplies a variety of vegetables to different parts of the State.

Sema inquired whether the farmers are getting the assistance provided by the government in the form of seedlings, machineries and other equipment of farming. He enlightened them about various programmes like PMGSY, distribution of seeds etc being taken up to mitigate their woes.

Sema said the agriculture and allied departments had already provided seedlings to the farmers and will provided more seeds for rabi season from September to compensate them for the loaases.

He assured the farmers to provide all possible help from the government’s side while urging them not to get discouraged. He also prayed for God’s blessings so that there is enough rainfall for the farmers to continue farming.

Sema said if the present situation continues, the farm production in the State will be reduced by 70 percent.

He stressed on tapping groundwater and other sources of water so that the farmers can cultivate their land even if there is no rain. In this regard, he said the state government is going to appeal to the Central government for assistance.

He noted that jhum cultivation in various parts of the State has gone to the dogs due to lack of rain while the terraced rice cultivation has also been affected as there is no rain or scanty rain since December 2020 in all the districts. Around 70 percent of the State’s farmers are engaged in jhum cultivation.

Sema said if the same trend continues till July, then the farmers may fail to undertake cultivation activities.

Agriculture director Yanthan urged the farmers to be ready with land preparation for cultivation so that they can start sowing as and when there is enough water.

The farmers apprised the team about their hardships and urged the government to come their rescue.