NSF and its units conduct candlelight vigil and prayer session for an inclusive, honourable and acceptable solution to the Indo-Naga political issue 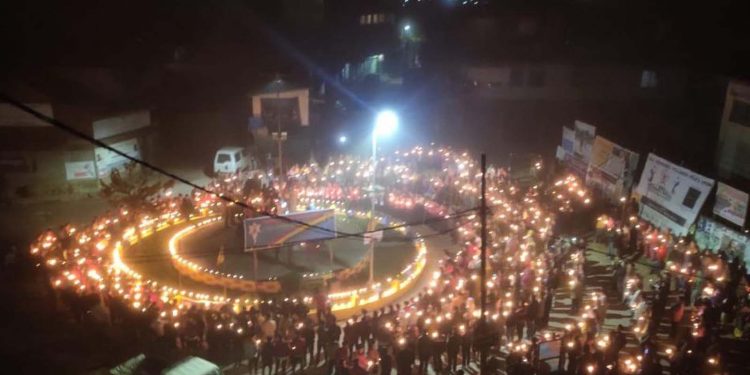 The Naga Students’ Federation (NSF) and its units conducted a candlelight vigil and prayer session across the Naga homeland on Monday evening.

This was conducted to express solidarity with the Naga negotiators for an inclusive, honourable and acceptable solution to the Indo-Naga political issue and for lasting peace and tranquillity in the Naga homeland.

It may be mentioned that another round of talks held in New Delhi between the Centre and the NSCN (IM) on Monday reportedly ended with no positive outcome.

Also read: Solution to Naga issue should be inclusive: PDA

Sources said the leaders of NSCN (IM) were adamant to their demand for a separate flag and constitution for Nagas.

Monday’s meeting was called by the centre to clear the impasse between the Centre and NSCN (IM).

In Kohima, the NSF conducted the programme at its office in Naga Club building.

Chairing the programme, NSF president Ninoto Awomi said the outcome of the important Naga talks in Delhi on Monday and Tuesday will affect the entire Nagas.

Ninoto Awomi said the NSF and the entire Naga people are anticipating a positive outcome of the ongoing talks which is honourable and acceptable.

As per the directive of the NSF, the Dimapur Naga Students’ Union observed the candlelight vigil and prayer session at its office in Dimapur.