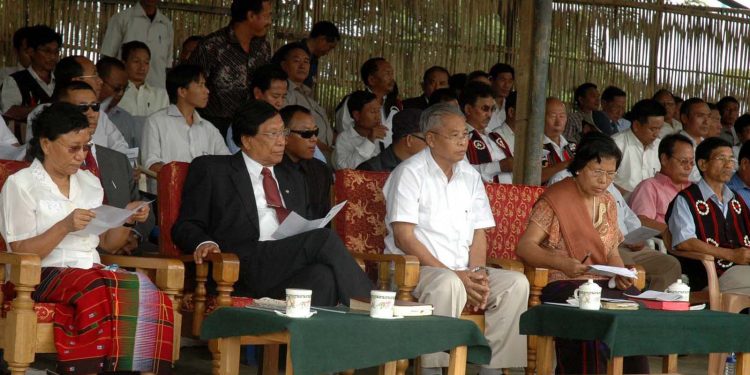 In his masterpiece ‘Murder in the Cathedral’, the leading English poet and critique of the 20th century TS Eliot raises the question, “Is it war or peace?” The question reflects a clear picture of the war clouds gathering over Europe on the eve of the World War I.

Back home, the political landscape in Nagaland has suddenly turned jittery, raising several vital questions with volcanic intensity. Despite 22 years of peace talks, the seven decades old insurgency problem in the state has remained without an answer till date.

Over three years ago, the news flashed in like a bolt from the blue that a ‘Framework Agreement’ (FA) has been signed by the NSCN (IM) leadership and the Central government. With the FA being kept a closely guarded secret, till date nobody quite knows what this agreement is all about. Was it just a publicity stunt of the ruling BJP to gain political mileage across the country during the three years preceding the 2019 Lok Sabha polls?

Meanwhile, the last few weeks were marked by the several hectic rounds of peace talks between the Central government headed by its interlocutor and Governor RN Ravi and the NSCN (IM) leadership headed by its general secretary Th Muivah and other Naga groups collectively clubbed as Naga National Political Groups (NNPGs).

So far the talks have been held separately with the NSCN (IM) and the NNPGs to thrash out a solution to the Naga imbroglio. However, till date there seems to be no light at the end of the tunnel.

Most surprisingly and in contrast to the established tenor of pace parley across the world, the Centre has bulldozed October 31 as the deadline for conclusion of the talks. This certainly appears to be a totalitarian approach, unbecoming of a responsible government.

Having said that it must be pointed out that a peace process cannot go on for an indefinite period and it must end at some point of time. However, sufficient notice, possibly involving several months, must be served particularly when even 22 years of peace process fails to yield any result.

The oligarchial attitude adopted by the Centre only makes one feel if Nre Delhi may secretly be wishing for derailment of the talks. Or, could it be a case of display of rude power by the central leadership on account of lack of political sagacity and any knowledge of dynamics of history.

Besides setting the October 31 deadline, the government has also made its position clear that only one agreement will be signed with all Naga groups and not separate agreements with different parties.

However, as October 31 draws closer, divergent opinions and statements are beginning to emanate from various quarters including the Government, the NSCN (IM), the NNPG and several other ends.

Mudslinging among the groups has also begun and the blame game is rife than ever before. There are also reports of some important government functionary (ies) working tirelessly since before the FA was signed to cause rifts, possibly a split in the NSCN (IM). This could very well be like hitting below the belt. The Delhi high ups may be told that questionable tactics and peace process cannot go hand in hand.

Meanwhile, the NSCN (IM) has not budged from its demand for a separate Naga constitution and flag while the government has in most unambiguous terms turned down the demand. Following the abrogation of the state constitution of Jammu & Kashmir and its flag and the Centre’s much hyped tag line of “one nation, one constitution”, it certainly appears to have become extremely difficult for Delhi to accept the NSCN (IM) demand for constitution and flag. Further, the possibility of exploring other options on this count also seems to be thin for the Centre.

The Centre has also asserted that the boundaries of the North-eastern states adjoining Nagaland would not be reorganised in finding a solution to the Naga insurgency problem. That in turn nullifies the demand of the principle Naga outfit NSCN (IM) for integration of all Naga inhabited areas in states like Manipur, Assam and Arunachal Pradesh.

Interestingly, the people of Manipur are not prepared to take this stand of the Centre lying down. An all-party delegation as well as leaders of various political parties is camping in Delhi to impress upon the Centre that any move that may affect the territorial integrity of Manipur would not be accepted.

While presently the NSCN (IM) has seemingly refrained from demanding clubbing of all Naga inhabited areas in the neighbouring states for the realisation of ‘greater Nagalim’, the demand for a separate constitution and flag constitute the nucleus of the charter of demands of the NSCN (IN) and that till this late hour the outfit continues to gun for a constitution and a flag for Nagaland. That being the decade’s old hardened stand of the outfit, it may be anyone’s guess if the rebel group would agree to any deviation from its declared stance now.

At this juncture it may be worth recalling the nil outcome of the Shillong Accord of 1975 signed by some members of the Naga National Council (NNC), other underground leaders and the Central government.

Significantly, NNC president Phizo, the then NNC vice-president Isak Chisi Swu and Thuingaleng Muivah, the then NNC general secretary were abroad and did not sign the Shillong Accord. However, the same was signed by Phizo’s younger brother Kevi Yalley.

Further, while Phizo neither endorsed nor rejected the Shillong Accord, both Isak and Muivah vehemently opposed it as a betrayal. The duo even reportedly urged Phizo to oppose the deal; but the NNC chief did not take side and maintained silence.  Accordingly, in due course Isak, Muivah along with S Khaphlang broke away from the NNC and formed the NSCN, which later fragmented into NSCN (IM) and NSCN (K).

Today after about four-and-a-half decades since the Shillong Accord, NSCN (IM) general secretary Muivah has not diluted his stand on sovereignty. Another term ‘shared sovereignty’ reportedly surfaced during the recent talks.

Now that New Delhi has set an ultimatum with October 31 and conditions, one may certainly question if veteran war horse Muivah would now soften his stand. The question also arises if a middle path exists or may evolve. An observer may feel that negativity seems to outweigh all positivity.

If the NSCN (IM) keeps aloof of signing any agreement, all these talks may prove to be exercises in futility without any lasting solution to the decades-old Naga insurgency problem in sight.

On the other hand, going by the trend of development, one feels that the other groups (NNPG) involved in the talks may be prepared to sign an agreement with the Centre on terms dictated by the Centre.

RN Ravi has also stated recently that the draft of the agreement has already been finalised after due discussion with the rebel groups. However, it is not quite clear as to where the NSCN (IM) stands so far as Ravi’s announcement is concerned. In any case, it is clear as daylight that the Naga imbroglio would remain unchanged if the NSCN (IM) does not become a part to any agreement that may be signed. Now that the last round of talks is slated for October 31, would it be wise or foolish for anyone to presume that 22 years of peace parley would suddenly bear fruit in one day?

While it is just a matter of hours for the October 31 deadline to come and go, observers seem to be at a loss as to how the government may win over the NSCN (IM) to finally make a paradigm shift from its original stand and agree to a middle-path (if such a formula could be evolved) and sign an agreement.

Unfortunately, even the greatest of optimists would opine that such a formula may be like a mirage.
Meanwhile, the ground reality in Nagaland is seemingly assuming a frightening aura if one takes into account certain reports appearing in the media, orders issued by the State Government on cancellation of leave of state government officials, including cops, unconfirmed reports emanating from  various sources, rumour mills and grapevines on mobilisation of Indian troops along the Indo-Myanmar border in Nagaland and Manipur to the point of sealing the border and also unconfirmed news on movement of NSCN(IM) cadres from the Hebron camp towards the Myanmar border and the like. While a good deal of unconfirmed reports may not be true, the whole of it may not be false.

As of now, a deal with NNPG may clearly be round the corner if various statements made before the media by the NNPG leaders are to be diagnosed in the proper perspective. On the other hand, as the clock ticks away to the last syllable of the last minute of the October 31 deadline, one may only wish that matured senses may prevail upon the Central government and the NSCN (IM) leadership not to miss this opportunity to strike peace.

Being deadlocked for decades together, it may be matured and advisable for the Centre to drop the October 31 deadline as a last chance in the interest of peace.

Diplomatically speaking, political acumen and foresight may dawn upon the Centre that mere hard talks may not be conducive to peace on all occasions. Such stand also has the potential to spell disaster. On the other hand, a deal made with the other groups sans the NSCN (IM) may only be as worthless as the Shillong Accord.

If, however, a deal with all the groups including the NSCN(IM) is struck by midnight of October 31, not only Nagaland, may be the entire country will celebrate peace. In its absence, one may be afraid that troubled times may possibly be lurking round the corner in Nagaland.