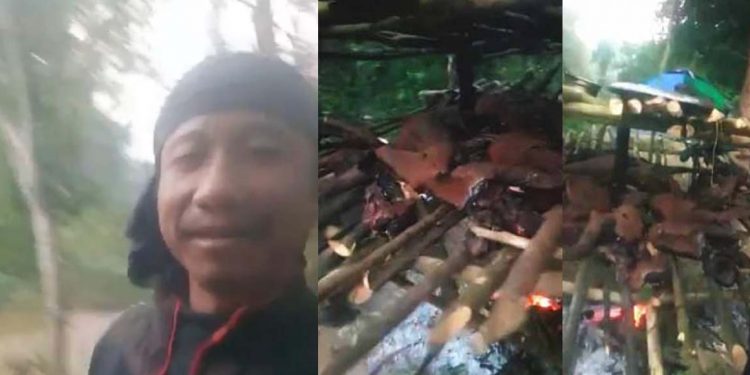 One of the hunters and the place of feasting.

Nagaland Forest Department on Tuesday informed that four persons responsible for the killing of wild animals inside Intanki National Park, have surrendered.

The chief wildlife warden of Nagaland issued a statement and said the four suspects surrendered before the Wildlife Wing of the Department of Environment, Forests and Climate Change of Nagaland.

A video, which had gone viral on the social media, had shown a group of youths, had pitched up tents inside a jungle, and were roasting meats of deer and a wild cat they had killed.

Later, it was identified that the youths had killed the animals inside the Intanki National Park in Nagaland.

“This follows investigation by the department into the incident and zeroing down on the suspects seen in the video celebrating Lockdown Festival,” the chief wildlife warden of Nagaland, said.

Despite lacking technical capability, the department using its own resources, traced and identified the culprits in question, the statement, said.

The case is being investigated further as per relevant sections of the Wildlife Protection Act 1972, and other relevant laws as applicable.