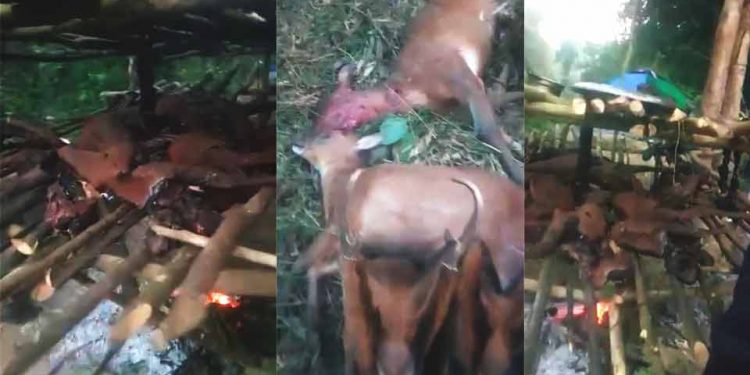 After the slaughter of a King Cobra in Arunachal Pradesh, some are celebrating Lockdown Festival by feasting on roasted endangered wild animals in Nagaland.

A video which has gone viral on the social media, showed that two youths from Nagaland proudly displaying the wild animals they killed to feast in a jungle.

With a tent on the backdrop, the video showed the two youths killed several deer, one wild cat in the middle of a jungle, somewhere in Nagaland.

“We are celebrating Lockdown Festival,” of the youths was heard claiming on the video, while proudly displaying the trophies of their hunt.

The youths were seen roasting huge chunks of deer meat and fish in the middle of the jungle.

Though the exact location of the jungle where the youths had laid the camp could not be identified, it was certain that it was somewhere in Nagaland.

The youth said they caught and punished the wild animals because the creatures did not listen to the orders of lockdown in the jungle, and were moving around openly.

“We are going to stay around this place for the next seven days, and it is going to be party-time for us,” the youth said, proudly displaying the victory sign with his fingers.

Officials of the Nagaland Forest Department said they came to know about the video, and are investing the case. It is being suspected that the bizzare incident was in the Intaki National Park in Nagaland.

On Saturday, Northeast Now had reported about people feasting on King Cobra meat in Arunachal Pradesh.

A video, which had gone viral on the social media, had shown that a group of people killed a 12-feet long King Cobra somewhere in Arunachal Pradesh for a feast.

Three people were seen proudly displaying the King Cobra, which they claimed to have killed in the jungle.

One of the ‘hunters’ of the King Cobra was heard saying that because of the lockdown; they did not have any rice left in their granaries, and had to kill the snake.

Surprisingly, no officials of the Arunachal Pradesh Forest Department commented on the incident.

Despite repeated attempts, Umesh Kumar, the deputy chief wildlife warden of Arunachal Pradesh could not be contacted for comments.