As per the Mizoram Covid19 update on Monday, the state has recorded 7 new Covid19 cases taking the total tally to 4,619.

With the new positive cases, Mizoram currently has 143 active cases.

So far, a total of 4,464 people, who were earlier infected by Covid19, have been discharged from the hospitals.

The new cases were detected during Rapid Antigen Test (RAT). 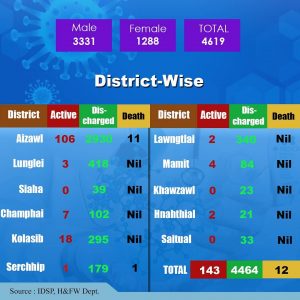 With the new Covid19 cases, India has set another grim one-day record as the overall tally reached 1,35,27,717 so far, according to the Union health ministry data on Monday.

India has again taken its spot as the second-worst hit nation in the world in terms of infections after the US.

Worldwide, India has emerged as the fourth-worst Covid19 affected country after the number of active cases increased to 12,01,009.