1 more dies of Covid19 in Assam; 352 new cases including 186 in Guwahati detected

Assam registered one more Covid19 death in the last 24 hours, taking the state’s toll to 1,118 while 352 new positive cases were detected in the state.

The death case was reported from the Lakhimpur district.

According to the Covid19 media bulletin released by the state health and family welfare department, a total of 73,329 Covid19 tests were conducted in Assam, out of which 352 new cases were found positive for the virus. 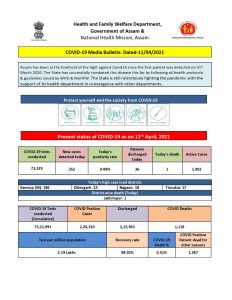 The state has so far recorded 2,20,310 positive cases while 2,15,943 people have been discharged from the hospitals.

The number of Covid19 patients, which died due to other reasons, is 1,347.

The Union health ministry said 80.92% of the new Covid19 cases are reported from these 10 states.

Maharashtra has reported the highest daily new cases at 55,411.

It is followed by Chhattisgarh with 14,098 while Uttar Pradesh reported 12,748 new cases.