Two-day Chapchar Kut celebration began in all parts of Mizoram amid fanfare and cultural fervour on Thursday.

Chapchar Kut is the most important and biggest festival of the Mizos, which is celebrated in March after completion of most arduous task of Jhum operation.

Amidst cultural fervour, thousands of people from different walks of life, dressed in traditional attires thronged Lammual or Assam Rifles ground here to celebrate the first day of the festival, which witness different cultural hues and traditional dances. 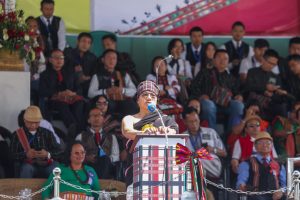 Art and culture minister R Lalzirliana, who graced the event as the ‘Kut Pa’ or father of the festival expressed desire to use the festival as an opportunity for promoting Mizo traditions and strengthening brotherhood.

“We should introspect ourselves how we celebrate the festival and how it has impact on our social life,” he said.

“We should not only use the festival for merry making but for promotion of our cultural and strengthen our brotherhood,” Lalzirliana added.

He also wished that the festival brings the desire to be developed and feeling love for the Mizo nation to the people.

Urging the people to treasure their culture and traditions, the minister also said any tribe or community that does value its culture easily perishes away.

During the celebration, exuberant dancers danced to the tunes of traditional music and songs while popular Mizo dances including were performed by different cultural troupes.

As a part of Chapchar Kut celebration, art exhibition, museum exhibition and photo exhibition were organized.

Chapchar Kut run was also organized in the morning as an inauguration of the festival.

The grand celebration of Chapchar Kut is also being held on Friday across the State.

Chief minister Zoramthanga would grace the event at Lammual as the ‘Kut Pa’.

Chapchar Kut is estimated to have started in 1450-1700 AD in a village called Suaipui.

Chapchar Kut was discouraged when the Missionaries came to Mizoram as it was felt that it did not adhere to Christian values.

However, it was revived in 1973 on a mass scale sans animistic practice and alcohol.