Mizoram can become a role model for others: Zoramthanga

We are the torchbearer of peace in the region: Mizoram CM Zoramthanga 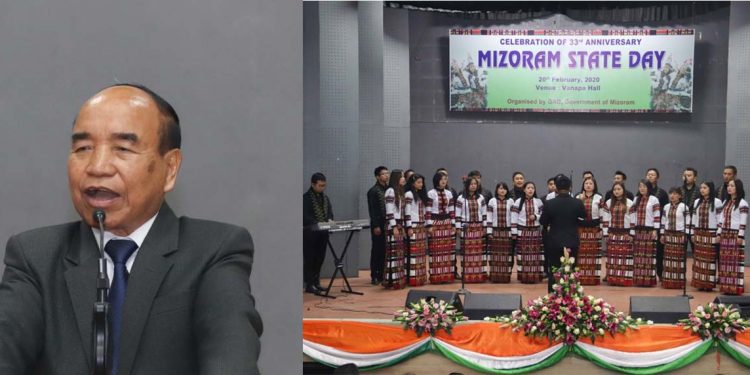 Mizoram chief minister Zoramthanga on Thursday said the State can become a role model for others if all the assets of the State are effectively exploited.

“We have enough resources, good climate, and sufficient rainfall. We also have enough fallow lands and if all these assets are tapped and effectively exploited we can become a role model for others in terms of development,” said the Mizoram CM.

Chief minister Zoramthanga said this while addressing the 34th Statehood Day celebration in Aizawl on Thursday.

Addressing the Statehood Day celebration at Vanapa hall, Zoramthanga said the State has been blessed with many assets.

He said the State has great potential to revolutionize its economy in the primary sector.

The chief minister also said Mizoram also has a conducive atmosphere apart from natural assets to usher in all-round development.

“Mizoram is not only the most peaceful states in the country but it also has a well-disciplined and regimented society which is conducive for bringing in development. God has destined the state to be a torchbearer in the field of politics and economy,” he said.

The former rebel leader-turned-politician also narrated about the long and difficult peace efforts that took at least 15 years.

He said 1986 was eventually the right time, in the end, to have a peace accord due to strong political power in the Centre and other essential factors.

He said the peace accord signed between the erstwhile underground Mizo National Front (MNF) and the government of India back in June 1986 continued to be the most reliable and exemplary model of agreement.

He said when Mizoram attained statehood it was not like other states as it was a state made with a special provision that safeguards the culture and ethnic interest of the people.

Mizoram became the 23rd state of India in 1987 after the Rajiv Gandhi led Congress government signed a peace accord on June 30, 1986, with MNF, ending 20-year long insurgency in the state.