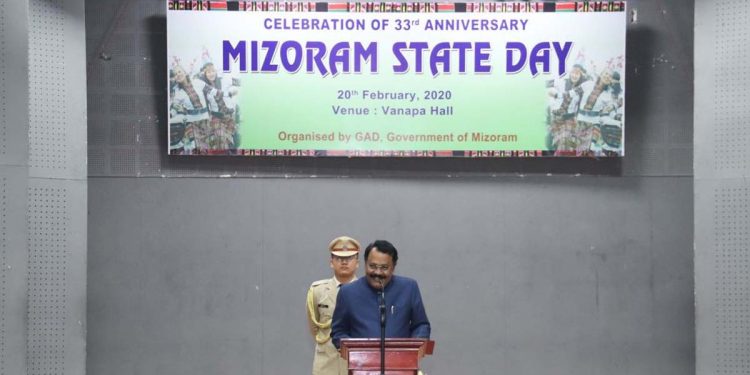 Mizoram governor PS Sreedharan Pillai on Thursday urged the state government to make efforts and refrain from depending solely on funding from the central government.

The Mizoram celebrated the 34th Statehood Day on Thursday with official functions being held in all the 11 district headquarters of the state.

Addressing a gathering at Vanapa hall here, governor PS Sreedharan Pillai expressed gratitude on the auspicious occasion and paid tribute to every person who was instrumental to the attainment of statehood.

He said the signing of the historic Mizo Peace Accord on June 30, 1986, remains a beacon of hope for the world that peace can be attained and sustained if the people and leaders choose it above violence.

“Mizoram is blessed abundantly on many fronts,” said the governor.

“We need to urgently unleash our untapped potential, be it in terms of horticulture, handloom, and handicrafts, human resource and tourism, among others,” he said.

He expressed happiness that the state government has a clear-cut plan and vision to become a self-reliant and welfare state.

“After we achieved statehood in 1987, our continued aim has been to attain a self-reliant and self-respected Mizoram,” he said.

The governor urged the citizens of Mizoram to rededicate themselves for the development of the state.

He also reminded the government officials of their responsibilities and urged them to work their best for the people.

“The achievement of our vision and goals largely depends on the top government officials who are present here.”

“If you collectively give your best efforts, I am certain that Mizoram will progress in leaps and bounds,” he said.

Pillai said the Centre has been making efforts for the development of the Northeast for which 10 percent of the Union Budget has been allocated for the region.

He also urged the churches and NGOs to back the state government in combating the growing menace of AIDS and cancer on a war-footing.

Extending his greetings to the people of Mizoram, Kovind said the entire nation admires the state and its people for their values and vibrant culture. He hoped that the state will scale new heights of progress in the coming years.

The Prime Minister also took to Twitter to greet the people of Mizoram on Statehood Day.

“The entire nation is proud of the Mizo culture and the contribution of the state towards India’s progress. Praying for Mizoram’s growth in the coming years,” Modi tweeted.

Naidu said people from two beautiful hill states of Mizoram and Arunachal Pradesh have made an immense contribution to India’s growth and development.

Amit Shah tweeted: “Extend my warm wishes to the brothers and sisters of Mizoram on their Statehood Day. The state of Mizoram is well known for its vibrant culture and hospitable nature. I pray for the growth and all-round development of the state. “

Mizoram was created following a peace accord signed between the union government and Mizo National Front (MNF), the erstwhile underground group headed by late Laldenga on June 30, 1986.

Subsequently, Mizoram became the 23rd state of India on August 14, 1987, after the President gave his assent to a bill to make Mizoram (then union territory) a full-fledged state.