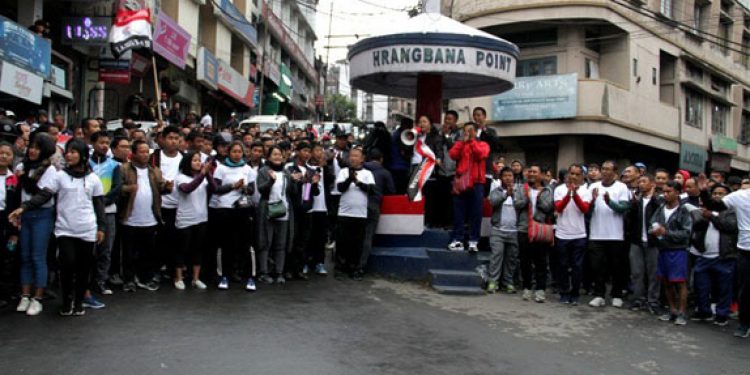 Chapchar Kut, which is the biggest festival of the Mizo people, was celebrated with traditional fervour at AR Lammual Ground in Aizawl as well as other districts of Mizoram with the theme, ‘Unity of Zo People’.

Thousands of people wearing traditional attires gathered at AR Lammual Ground and joined the celebration where traditional dances, songs and games were presented with participation of a large number of artistes.

Mizoram Art & Culture Minister R Lalzirliana while speaking about the importance of the festival being celebrated with the theme ‘Unity of the Zo People’ who live in separate states and countries, said, “Though the boundaries between us bring differences in our language and behaviour, this is what makes our Zo culture richer.”

R Lalzirliana advised to use the festival as a mark of unity and brotherhood as “unity is most important for the development of the land”.

He added, “Every great country consists of people who uplift their culture. Wherever we are, we have to carry the Mizo spirit of humility.”

The celebration of Chapchar Kut seems to have started in between 1450 AD to 1600 AD.

In olden days, the celebration of the festival often lasted for three days or more.

While alcohol was an inevitable part of the festival in previous occasions, the modern version now solely consists of cultural display with strict checking at the gate to ensure that alcohol is not present within the grounds of the celebration.

According to the Mizoram government website, “Chapchar Kut literally means – a festival held during the period when the bamboos and trees that have been cut down are being awaited to dry to be burnt for jhumming.”

The Chapchar Kut 2019 celebration started with a ‘Chapchar Kut Run’ programme at 6 am with participants from over 150 YMA branches in Aizawl.

The festival celebrated at Aizawl was attended by delegates from Falam, Tidim, Halflong, Tahan, Shillong, Manipur and Bangladesh.