Apprehending serious deterioration of law & order in Shillong, the district magistrate of East Khasi Hills has ordered re-imposing of curfew in the city with effect from 9 pm on Sunday to 6 am on March 2, 2020.

Issuing an order on Sunday under section 144 CrPC, the district magistrate, M. War Nongbri, said “information is received that there is apprehension of serious deterioration of law & order in Shillong agglomeration and adjoining areas”.

The order said “there is every likelihood of serious breach of peace and tranquility and may lead to loss of life and property”. 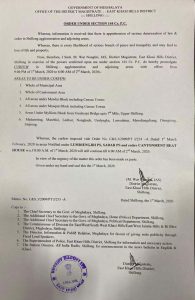 In view of the deteriorating law and order situation in the city, the district magistrate, M. War Nongbri, in exercise of the powers conferred upon her under section 144 Cr.PC, has promulgated the curfew in Shillong agglomeration and its adjoining areas.