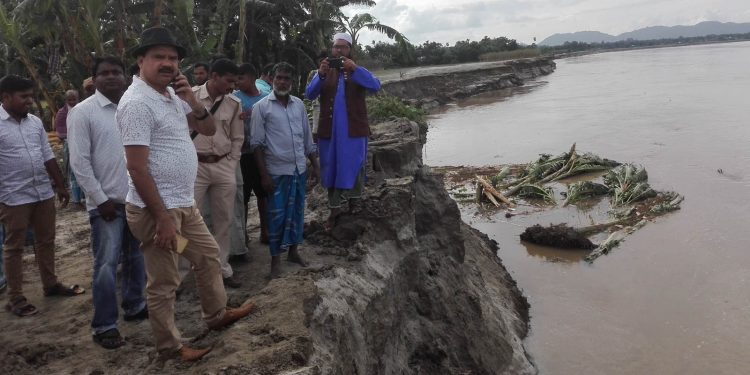 A view of erosion by river Brahmaputra on Sunday. Image credit - Northeast Now

The river erosion by river Brahmaputra for the last three days is posing threat to the Goalpara town.

In its three days’ destruction, the mighty river has eroded a vast area of residential and agricultural land.

The eroded area has been measured as 70 metres long and 15 metres wide.

On Sunday, the villagers of No. 2 Baladmari Char gathered at the spot of erosion and staged protest against the indifferent attitude of the Water Resources department.

In response to the call, the MLA visited the area in the afternoon, contacted the department officers and assured the public of taking steps for protecting the area immediately.

Looking at the seriousness of the situation, the local leading citizens decided to organize a public meeting of greater Baladmarisar at the erosion site on Monday.

The areas of the four Baladmarisar sandbars came under the grip of erosion in 2017-18.

During that period, 6 educational institutions and five religious institutions including mosques were eroded by the river and thousands of people were displaced.

The district administration later temporarily shifted about five hundred people to Moilaputa on the outskirt of Goalpara town where they are still living without proper sanitation and hygiene.

A scheme worth Rs 4 crore under the National Bank for Agriculture and Rural Development (NABARD) was also undertaken to protect the Baladmari sandbars in 2017-18.

However, the locals alleged on Sunday in the name of protecting the people from erosion, Water Resource department contractors had placed concrete porcupines in the erosion site of the river.

But the work was carried out without any planning and supervision of the departmental technical experts.

“Most of our people are illiterate and understand less about the works of the scheme,” said R. Islam, a local.

“They are happy if they are picked up as labours or Mahari (site manager) by the contractors.”

“So, the department officers rarely come here and contractors do their work in their own way,” he added.

A local teacher on condition of anonymity said, “Rs 4 crore is a huge amount but only 20 per cent works in fact have been done in the site.”

“As a result, the Baladmari Char is facing erosion again.”

“Corruption has taken place in the implementation of the scheme with involvement of contractors, politicians and departmental officers,” he alleged.

Meanwhile, regarding the allegations, Northeast Now tried to contact Siddhanta Sarma, executive engineer, but failed as his mobile phone remained switched off.

Northeast Now sent messages to both the engineers, but no reply has been received till filing of this report.