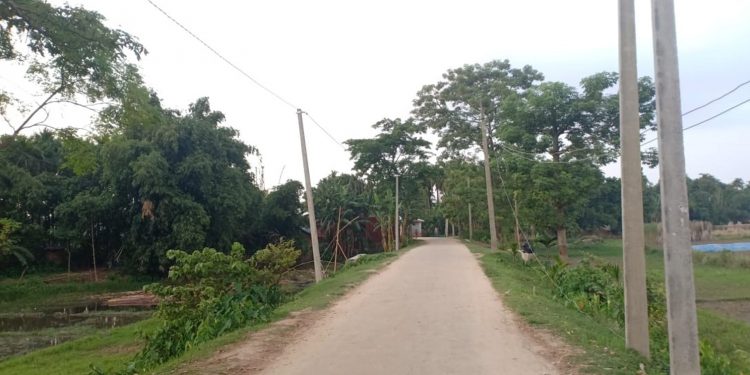 Electric poles are there at Baladmari Balarbhita village but no power connection. Image credit - Northeast Now

The Central government has several schemes for rural electrification but the Baladmari Balarbhita village under Matia revenue circle of Assam’s Goalpara district is yet to be electrified.

The Centre launched schemes like Saubhagya and Deen Dayal Upadhaya Gram Jyoti Yojona so that no village in the rural areas is left to be electrified.

The village in Goalpara witnessed electric poles and few cables here and there few years back which are still standing but no electric connection has been provided.

“Several electric poles were erected and few posts were connected with wires four years back. Our students were very elated with the hope to attend classes under electric fans during the hot summer like the present time,” Abu Shama, headmaster of Balarbhita LP School, told Northeast Now.

“But, the hopes of our students are yet to be fulfilled. They continue to suffer during summer,” the headmaster added.

“I am surprised to see the tall claims made by the politicians that hundred per cent electrification has been attained when a village like Balarbhita, which is just 10 km away from Goalpara town has not received power connection,” the headmaster said.

“There are poles from Aynal Bazar to our school and I wrote several times to the department for the connection. But there has been no response,” added the headmaster.

Though there is no television or other digital devises, most of the people have availed mobile phones and they depend either on solar light battery or have to go to the neighbouring villages for recharge.

“In such a position how would the dream of the Prime Minister’s Digital India be fulfilled?” asked Aynal Hoque, a  gaon panchayat member.

When contacted, Baban Kumar Paul, assistant general manager (Rural electrification) of Assam Power Distribution Corporation Limited (APDCL), Goalpara, said, “The village might have been left out somehow due to lapses on the part of the earlier construction agency service of which has already been terminated.”

“But I assure that the issue will be taken up and the village will be electrified as soon as possible,” the APDCL official said.

Prime Minister Narendra Modi in 2018 had declared 100 per cent electrification in the country.

However, even during that time, according to media reports, 31 million households across the country had been passing days and nights without electricity.