Political temperature in Assam heats up: Top Congress leaders sweat it out to woo voters

The Congress and the BJP are going all out to woo the voters. 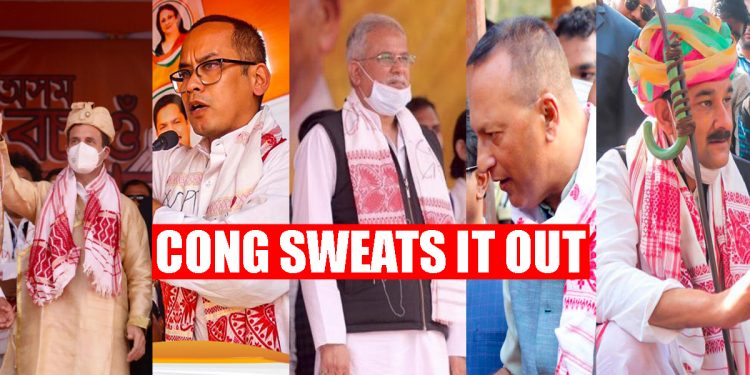 Political temperature in Assam is heating up with parties intensifying their election campaigning.

Intense campaigning is underway across Assam with parties, especially the Congress and the BJP going all out to woo the voters.

The near-depleted Congress two months back, has somehow managed to get its act together, just in time, to launch one of the party’s most impressive election campaigning thus far.

Taking a cue from its rival BJP, the Congress has also decided to bring in their top national party leaders to campaign in Assam for the Assembly Elections.

On February 14, Congress leader Rahul Gandhi had visited Assam, where he addressed a massive gathering in Sivasagar.

During his rally in Sivasagar, Rahul Gandhi launched a scathing attack on the BJP-led Governments in the Centre and Assam.

Rahul Gandhi had said that if the Congress is voted back to power in Assam, it will not let CAA be implemented.

Priyanka Gandhi is likely to visit Assam on February 24.

Priyanka Gandhi will be addressing an election rally at Tezpur in Assam.

Notably, the Congress has planned to hold at least three public rallies in the Barak Valley, Upper Assam and Lower Assam in February for Rahul Gandhi and Priyanka Gandhi.

While, Bhupesh Baghel is ensuring that the Chhattisgarh model is being implemented properly by the Assam Congress to ensure victory in the upcoming Assembly Election in the State.

On the other hand, Jitendra Singh Alwar is being seen opting for campaigning alongside the top Assam Congress leaders like Lok Sabha MPs Gaurav Gogoi and Pradyut Bordoloi.

Jitendra Singh Alwar is also being seen interacting with locals trying to get a pulse of the voters in Assam.