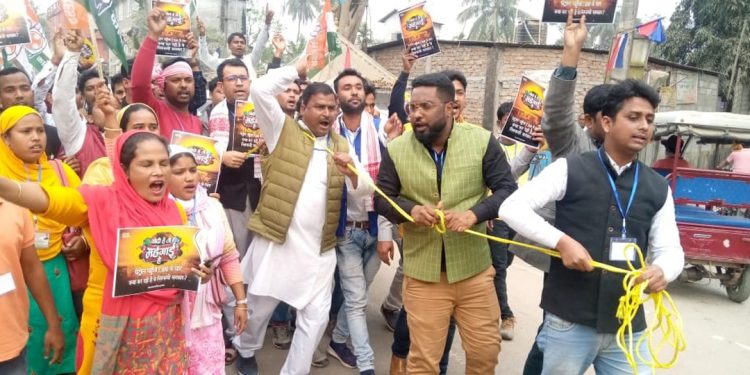 A view of the protest in Dhubri. Image credit - Northeast Now

Youth Congress workers on Wednesday staged a demonstration in Dhubri in protest against the hike in fuel prices.

The Dhubri district unit of Indian Youth Congress (IYC) activists staged the protest demonstration against hike prices of petrol, diesel and LPG in front of the party’s district office on Wednesday.

The protestors gathered on road in front of the party’s district office located near Basant Talkies in Dhubri town.

During the demonstration, the Youth Congress workers came down heavily on the Narendra Modi-led National Democratic Alliance (NDA) government in Centre for its failure to control the skyrocketing prices of all essential commodities including petrol and diesel.

After reduction of Rs 5 recently, the petrol price in Assam stood at Rs 86.44 per litre while the price of diesel per litre was Rs 80.62.

On Wednesday, the price of LPG cylinder in Assam was Rs 818.

Sumit Dubey said, “The Modi government has made it clear that it is not concerned about the problems of the common people at a time when the prices of petrol diesel and LPG are continuously increasing.”

“The price rise has badly hit the common people,” he said.

Sumit Dubey demanded that the hike in fuel prices be immediately rolled back in the greater interest of the common people.