Alleged coal mafia Sunil Gurung is seen walking alongside the security barricade of CM Sonowal, who has Z+ security cover

Reiterating its stand that the ruling BJP leaders are involved in illegal mining of coal, Opposition Congress in Assam on Thursday circulated photographs of one of the alleged coal mafias walking by the side of chief minister Sarbananda Sonowal, to media.

Alleged coal mafia Sunil Gurung is seen walking alongside the security barricade of Sonowal, who has Z+ security cover, in the photographs which were circulated by the Congress spokesman Durga Das Boro.

“The Z + category security is so strict that the guards don’t even let the MLAs come near to the barricade. So how come Sunil Gurung walk alongside the chief minister?” questioned Boro while talking to mediapersons on Thursday. 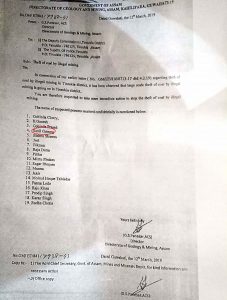 Gurung is one of the coal mafias involved in illegal coal mining in eastern Assam’s Tinsukia district.

Gurung’s name also figured in a complaint lodged by the director of geology and mining, Assam to the Tinsukia deputy commissioner (DC).

The director of geology and Mining department had lodged the complaint to the Tinsukia DC in March this year naming a total of 19 persons over theft of coal by illegal mining.

“We have given documentary evidence to the government in the past that illegal mining is on in Tinsukia district. Over 1,000 FIRs have been lodged in the Margherita and Ledo police stations against the illegal coal mining and yet there is no action so far,” said Boro.

Lok Sabha MP from Nawgong and former minister Pradyut Bordoloi had recently raised the issue of illegal coal mining in Lok Sabha and demanded that an inter-ministerial fact finding team must be instituted to probe “large-scale illegal coal mining” in Ledo and Margherita.

On being asked about the development, media adviser to Assam chief minister Hrishikesh Goswami said that he is not aware about any such developments.

“I don’t know any Gurung. Many people come to meet the chief minister and take a photograph with him every day. Based on a photograph, it is not justified to arrive at any conclusion,” he said.

“Recently one person came and clicked a photograph with the chief minister and released it on social media. Later we came to know that he is involved in two murder cases,” said Goswami.