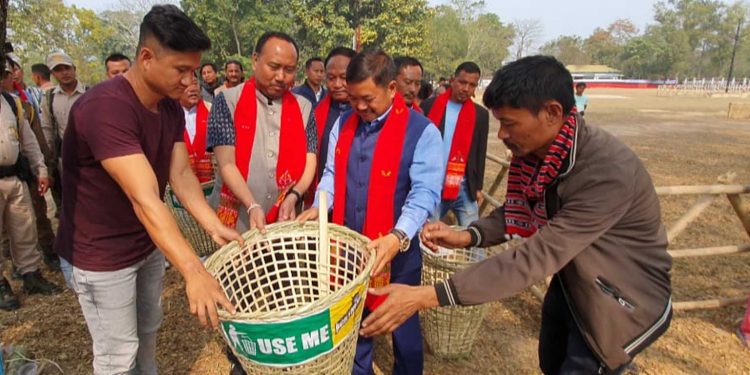 The 46th Karbi Youth Festival (KYF) will begin at Taralangso, on the outskirts of Diphu, from Saturday and will end on Wednesday.

The Karbi Youth Festival is the oldest, largest, most colourful and pulsating youth festival of Assam.

With an aim to propagate the rich cultural identity of the Karbi community, KYF showcased the ethnic diversity of the community during the celebrations.

The festival began in the early ’80s and since the KYF has shown the path for other ethnic tribes to preserve and propagate their cultural identities.

On the eve of the function on Friday, a local youth club- Lightning Sports Club- distributed bamboo wicker waste baskets, eco-friendly dustbins with an aim to keep the surroundings clean during the five-day festival.

Chief executive member (CEM) of Karbi Anglong Autonomous Council (KAAC) Tuliram Ronghang, while distributing the bamboo baskets said, “CCTV cameras will be installed from Taranglangso to the first gate near DIG Bungalow a distance of 2.5 km.”

“Those who will be found creating trouble and in an inebriated condition will be arrested and confined in one particular place till the festival is over,” he said.

“It is our responsibility to keep the place neat and clean and not throw waste papers, empty packets of chips and polythene bags,” he reiterated.

“Anyone having waste papers or polythene bags, they should dispose of in the dustbins,” he said.

“It is our moral duty to stop others from littering the place as well,” the CEM urged.

On February 12, during the cleaning drive taken out by Diphu Municipal Board (DMB) at Taralangso, the DMB chairman Rah Kro also stressed on cleanliness and a polythene-free festival.

Later, the club members installed the bamboo dustbins at various locations of the festival venue.