Torchlight rally against CAA in Diphu 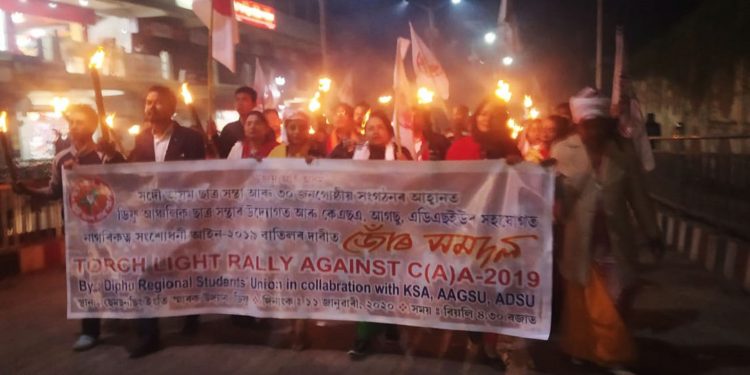 Activists of Diphu Regional Students’ Union along with local citizens took out a torchlight rally against CAA in Diphu on Saturday.

The rally began from Semson Sing Ingti Memorial Park, went through the market and back to the Park.

Diphu Regional Students Union general secretary Sorjon Hanse said, “We urge the parents to let allow their children to participate in the anti-CAA movement and take it forward.”

“If CAA is not repealed, it will destroy Assam completely. We cannot accept it,” Hanse added.

“Irrespective of the religion we should fight against CAA in unity and continue it till the Act is abolished,” he reiterated.

“The Assam government is holding peace meeting in various places across Assam. Instead of such meetings, let the PM Modi declare that the Act will not be implemented in Northeast,” he added.

A similar rally was also held in Bakaliaghat by the All Assam Students’ Union (AASU) and was participated by the members of Hindi Bhashi Samaj, Bengali Samaj, Srimanta Sankardeva Sangha, Karbi Student Association, Marwadi Samaj, and AJYCP.