Hima Das to feature in KBC 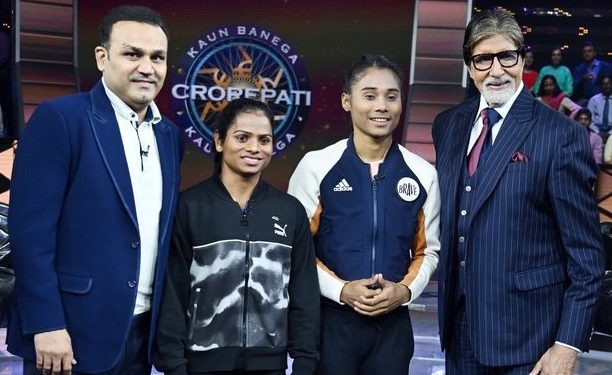 She appeared for the episode along with sprinter Duttee Chand and former cricketer Virender Sehwag.

“It was really a great honour and best moment of my life while playing Kaun Banega Crorepati with the one and only Bollywood superstar @SrBachchan sir alongwith the Nawab of Najafgarh @virendersehwag and @DuteeChand Really enjoyed the show and learned alot from AB sir and Viru sir,” Hima said in a tweet.

Bachchan, who had been briefly admitted to the Nanavati Hospital for a regular check up, has resumed shooting for the quiz show.

Sharing a snapshot of the three leading sportstars along with him in his personal blog, Bachchan wrote, “YES … back to the grind … front foot forward, head down, consuming all the days work and ready in dress and briefing for the KBC ‘Karmveer’ and a new cluster for the week …”

“…and soon we are on to the opener and the presence of the greats in the field of sports that bring so much love admiration and pride for the Nation … 2 of the most valued sprinters in the Athletics world, and the master himself Virendra Sehwag ..,” Bachchan added.

“…the ladies are Dutee Chand and Hima Das …excelling themselves in the 100m and the 400m event winning medals of honour in Gold and giving the Country so much to be proud of … they come from such un i manageable circumstances .. poverty , no food to eat … living in penury … but sports and determination took them out of that and brought to the World platform … giving them the opportunity to move further up in their fields and bring greater glory. ..,” he further added.

Bachchan had been admitted to Mumbai’s Nanavati hospital last Tuesday was discharged from there on Friday.

However, the actor had in his blog slammed people who were speculating about his health.