Prasanta Phukan, the legislator from Dibrugarh in eastern Assam has turned into a parliamentarian over night!

Believe it or not -Ministry of Railways can make anyone a member of Parliament on any given day at its own free will.

In a major goof up by the Indian Railways, Prasanta Phukan, the legislator from Dibrugarh in eastern Assam has turned into a parliamentarian over night!

Yes, that true, the invitation letter issue by the Indian Railways for the grand inauguration of the much-hyped Bogibeel Bridge by Prime Minister Narendra Modi states that Prasanta Phukan is a member of the Parliament.

Whereas, actually, Phukan is a member of the Assam Legislative Assembly of the Bharatiya Janata Party (BJP) from Dibrugarh constituency. 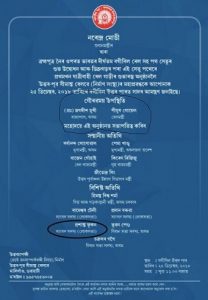 Among the dignitaries to be present on the  momentous occasion, Assam Governor Prof Jagdish Mukhi will grace the programme arranged at the north bank of Bogibeel bridge in Dibrugarh on that day.

Union Railway Minister Piyush Goyal is also coming to be part of the historic moment.

However, goof ups do not end with Phukan’s ‘position’.

Also read: Bogibeel Bridge can survive earthquake with magnitude  of over 7.0

It remains unclear from the invitation letter as to whether Prof Mukhi or Union Rail Minister Goyal will preside over the inaugural programme.

The NF Railway, however, reacting to the Northeast Now report, tweeted that the card in question was not its official invitation card.

Please do not surmise anything on the basis of wrong information.

But the question is, how can the invitation card, be leaked before its finalisation.  Will NF Railway authorities initiate a probe to find out who are involved in the card leaks.